Pico projector developer moves away from expensive frequency-doubled green lasers as part of a plan to nearly halve its cash burn rate. 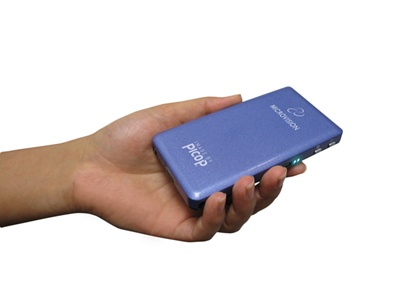 MicroVision, the Redmond, WA, company that is pioneering the development of laser-based pico projectors, is changing its business strategy after racking up huge losses in fiscal year 2010.

Although MicroVision achieved its key goal of releasing a first commercial product last year – in the form of the SHOWWX laser pico projector – the company was also hit hard by a double-whammy in the third quarter of 2010.

Not only did its lead customer Nioncom delay plans to launch a new “MemoryKick” product featuring MicroVision’s pico projector by at least nine months (it decided to switch the operating system from Windows to Android), but key supplier Corning decided to stop manufacturing frequency-doubled green lasers.

The net result was that MicroVision was left with both a huge build-up of inventory and fewer suppliers of a key component. The complexity and high cost of that key component is also holding back the widespread deployment of laser-based projectors inside products such as smart phones and tablets.

Overall, that made for grim reading in MicroVision’s preliminary financial results for fiscal 2010. The MemoryKick delay means that MicroVision will post revenues of only $4.7 million for the year, much lower than had been anticipated. And with operating expenses running at a rate of around $9 million per quarter, that will translate to a net loss of more than $48 million.

Cash burn
Last August, MicroVision agreed an equity deal with Azimuth Opportunity, an investor based in the British Virgin Islands. Under the terms of that deal Azimuth agreed that it could be issued with up to 17.7 million shares, potentially worth $60 million at the time.

With its cash reserves taking a pounding throughout the year, and exacerbated by the Nioncom delay, MicroVision has been forced to use that Azimuth facility, but its weak share price meant that in September 2010 MicroVision could raise only $12.5 million through the sale of 6.3 million shares. Since then, the company has managed to raise more funds and it finished the year with $19.4 million in cash and cash equivalents on it balance sheet.

At its 2010 burn rate, those assets would not last very long, and so MicroVision’s CEO Alexander Tokman is aiming to cut the cash burn by 40%, and has recently completed an inevitable reduction in workforce to help achieve that.

Other key parts of the new strategy include focusing all development efforts around direct green laser diode emitters because, as Tokman explained, the cost of frequency-doubled green lasers is too high for them to form part of an optical engine suitable for applications in smart phones – in fact, the cost of just the laser is more than the price that manufacturers are prepared to pay for the entire engine.

The solution, upon which MicroVision has now pinned all hopes, lies in the development of green laser diodes. Although these devices remain relatively expensive right now, because they will ultimately be produced via a semiconductor wafer process in a similar manner to blue, red and infrared laser diodes, there is a huge potential to reduce costs – as has been seen in recent years with the declining price of the blue lasers now routinely used in the Blu-ray Disc format.

Direct green laser development
Lots of companies, among them the blue laser pioneer Nichia in Japan and the European optoelectronics giant Osram Opto Semiconductors, are working on the technology, but devices with sufficient power, efficiency and reliability for use in consumer electronics are not yet available at the price level needed.

Speaking to investors about MicroVision’s new strategic approach for 2011, Tokman admitted that it would likely be another year or so before lasers with the required specifications become available, but he remains confident that they are on the way. Tokman identified Osram OS, Nichia and little-known Californian start-up Soraa as the front-runners in the race to develop the devices.

While Nichia and Osram OS are big hitters, Soraa, which was co-founded in 2008 by Shuji Nakamura – the key man behind the development of blue LEDs and lasers at Nichia before leaving the company in acrimonious circumstances a decade ago – is by contrast a tiny spin-out from the University of California, Santa Barbara.

But through its development of non-polar and semi-polar semiconductor materials, Soraa is making itself heard. At the Consumer Electronics Show in Las Vegas last month, it demonstrated direct green emitters that it believes are suitable for pico projectors delivering an output of more than 20 lumens. The same company can make very powerful blue laser diodes in a similar way, but the key question is how quickly will it be able to scale up and hit the price points needed for consumer applications.

The challenge now facing MicroVision is to stay afloat until Soraa and its established competitors can complete that development. If it can achieve that, with smart phone OEMs now starting to develop pico projector features, and a head-up display development agreement already in place with Pioneer, MicroVision’s own future should start to look a lot brighter.

• Following the financial and strategic announcement by MicroVision, shares in the company lost 20% of their value, with its stock trading on the Nasdaq exchange at around $1.90 early on February 16.