Rubicon Technology, a key supplier of sapphire wafer material to makers of gallium nitride-based LEDs, has posted another sharp increase in revenues, after the US company began to ramp capacity at its new production sites in late 2010.

CEO Raja Parvez described the end to the year as “extraordinary”, with demand from TV backlighting, automotive applications and general illumination combining to drive a 44% sequential increase in sales revenues to $29.5 million in the December quarter.

As well as increased volumes, Rubicon is benefiting from upward price pressure, with its average selling price increasing 30% in the closing quarter of the fiscal year. For the year as a whole, Rubicon’s sales soared to $77.4 million – almost four times the $19.8 million that it posted for 2009.

Rubicon has cemented a position as the leading supplier of large-diameter sapphire wafers, especially 6-inch material, and LED makers such as Philips Lumileds are now migrating to this wafer size as it allows them to increase manufacturing volumes without expanding factory floorspace.

Moving to the larger format is widely regarded as a key step towards reducing the cost of high-brightness white LEDs and making general lighting applications much more affordable. Although current 60 W and 40 W solid-state equivalents to conventional light bulbs remain expensive, Parvez says that companies including Philips will release similar products at significantly lower prices later this year.

Philips’ 60 W LED equivalent, the AmbientLED (also sold under the EnduraLED brand), consumes only 12.5 W, and has just become the first to win ENERGY STAR qualification. Available at Home Depot, the 60 W equivalent is currently [February 2011] for sale at just under $40.

Philips is also the first company to enter a product for the US Department of Energy’s “L Prize” for energy-efficient light ‘bulbs’, with an even more efficient product that is undergoing DOE testing currently. The L Prize criteria require a bulb to produce a 900 lumen output while consuming less than 10 W.

Key applications
Domestic bulbs are sure to drive the market in the future, but for the moment the key application still driving growth in the fast-moving LED market is TV backlighting. Although some short-term weakness was seen in this application in late 2010, Parvez believes that this market softening was simply an inventory correction, and that the LED TV market still offers huge growth potential as penetration rates are still relatively low.

The TV market analyst company DisplaySearch recently estimated that LED-backlit TVs represented about 20% of the wider LCD TV market in 2010, and it is predicting a penetration rate of 50% in 2011 as the continued reduction in LED production costs is cutting the price premium of LED backlights rapidly.

General lighting applications remain largely restricted to streetlighting and architectural applications for now, with Osram Opto Semiconductors reporting earlier this week that the technology is beginning to catch on in some far-flung parts of Russia, as well as the traditional early adopters in Asia and particularly China. Osram told optics.org that approximately 500 million outdoor lighting fixtures using LEDs are now installed around the world.

Scaling up
Parvez believes that Rubicon has stolen a march on its competitors by developing a manufacturing process that can produce 6-inch diameter sapphire wafers with the kind of quality and reproducibility that are critical for making high-performance LEDs with good yields. “We will have an advantage for many years to come,” he told investors, explaining that making the large-diameter material is extremely difficult from a technical point of view.

Rubicon is spending heavily to scale up its new manufacturing facilities and keep pace with demand, but the company is generating so much cash at the moment ($13.3 million in the latest quarter) that it is easily able to cover the cost of that investment. 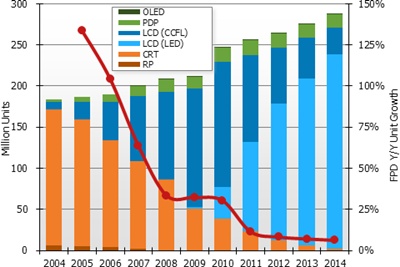 With a technological advantage in a fast-growing market, Parvez is unsurprisingly bullish about the year to come, and expects Rubicon to enjoy “a very strong 2011”, characterized by strong demand and stable pricing. For the first quarter of the year, the company has forecast another 20% sequential increase in revenue.

And that strength looks certain to continue – Rubicon’s future growth will be largely tied to the LED industry’s move to 6-inch wafer production, and Parvez noted that the company is already selling this material to more than a dozen LED manufacturers – most of whom are still in the development phase.

At the moment, Rubicon’s sales of 6-inch sapphire are largely restricted to a single customer that placed a $70 million order in mid-2010. But with 2012 looking likely to be a key year in the transition to solid-state lighting in mainstream applications, that customer base is certain to grow.