Infrared specialist will supply up to 22 mercury cadmium telluride detectors for next generation of Meteosat imagers. 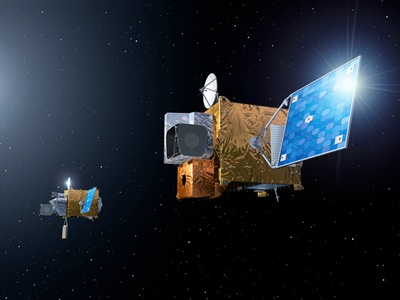 Sofradir, the developer of infrared detectors based in Paris, France, has won a contract worth “tens of millions of euros” to supply up to 22 high-end sensors for a forthcoming network of six geostationary weather satellites.

The Meteosat third-generation (MTG) network, set for launch from late 2017, is designed to give weather forecasters and climate researchers much greater insight into weather patterns, and will feature technologies such as high-resolution infrared sounding – yielding a layer-by-layer analysis of atmospheric chemistry.

According to Sofradir CEO Philippe Bensussan, the contract win is the largest in the company’s history, and illustrates the growing demand for high-end sensor technologies. “This is a significant achievement on top of the record 26 flight model infrared detectors we delivered for space missions in 2010,” he said. “We’ve seen our satellite business triple in the last five years, as earth observation spacecraft use more infrared imaging and multispectral equipment that increasingly require visible and infrared products.”

Sofradir’s MCT detectors operate over the full range of infrared wavelengths, extending beyond 15 micron in the so-called “very-long-wave” region - an important region spectroscopically.

As a result, the equipment will not just be taking the familiar pictures of clouds seen in today’s weather forecasts – the MTG network will also identify and measure chemicals in the atmosphere, with the IRS tool able to provide an analysis of chemical composition versus altitude.

The French firm began its involvement with the MTG program in 2007, collaborating in a feasibility study with CEA/LETI. Since then it has been working in the preliminary phase of detector development in preparation for the roll-out of the major contract.

The MTG satellite network will feature four imaging satellites (known as MTG-I) and two sounding satellites (MTG-S), all placed in geostationary orbits. According to ESA, the sounding elements represent a key innovation, providing technology capable of altitude analysis for the first time. The sounders will also carry the “Sentinel-4” payload for ESA’s Global Monitoring for Environment and Security (GMES) program.

The first MTG-I satellite is scheduled for launch in late 2017, with the first MTG-S following in early 2019. It is hoped that the payloads will provide high-resolution meteorological data through 2037.

Thales Alenia Space is the prime contractor for the MTG-I element, including the FCI equipment, while Germany’s OHB is prime for the MTG-S payload. The infrared sounding instrument used in MTG-S will be developed by fellow German firm Kayser Threde.

Sofradir adds that the MTG contract represents its third major win for space missions this year, following agreements to supply infrared detectors for the MUSIS/CSO military imaging system, and the Sentinel-5-Precursor satellite mission – the latter will feature a spectrometer placed into low-Earth orbit to provide atmospheric analysis of ozone, NO2, SO2, CO and aerosols, and is set for launch in 2014.