Fourteen of the UK company's high-end CCD devices will feature in an ambitious new astronomical project. 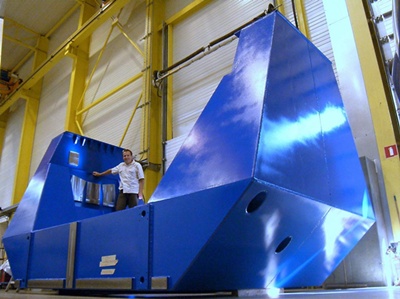 e2v Technologies has won a $5.4 million, two-year contract to supply a complete camera system for a major new astronomy project in Spain that is seeking to answer one of the mysteries of the Universe.

The UK firm, which provides high-end CCD and CMOS detectors for scientific, defense and industrial applications, will deliver a gigapixel-scale camera to be used in a five-year survey of the northern sky by the Observatorio Astrofísico de Javalambre’s new T250 wide-field 2.5 meter telescope, which is currently under construction in Belgium.

The observatory, based in eastern Spain between Madrid and Valencia, said that e2v was one of five bidders for the camera system contract.

Astronomers working on the survey, which is a collaboration between institutes in Brazil and Spain, will be aiming to shed some light on the cosmological mystery of ‘dark energy’ by creating a map of the observable Universe across the near-ultraviolet, visible and near-infrared parts of the spectrum (350-1000 nm).

To do that, the camera will use 14 of e2v’s new 85 megapixel detectors, assembled into a near-square mosaic format to yield an image containing 1.2 billion pixels and measuring nearly half a meter wide.

The camera system, which will also include wavefront sensors, should be able to produce the giant images in just ten seconds, with spectroscopic information contained in each of the pixels. Weighing more than half a ton in all, the system will operate in a vacuum at minus 110 °C, and each image that it captures will need 2 GB of computer storage.

Giant galaxy survey
Professor Mariano Moles, Collaboration Board Chair for the Javalambre Physics-of-the-Accelerating-Universe Astrophysical Survey (J-PAS), said: "J-PAS is a 10,000 square degree survey whose main goal is trying to solve the mystery of dark energy by measuring tiny modulations in the distribution of galaxies.”

Dark energy is the term used by cosmologists to describe the mysterious force that is causing the Universe to expand at an accelerating rate (itself a discovery that scooped this year’s Nobel prize for physics), but for whose existence there is little in the way of a theoretical explanation or physical evidence. 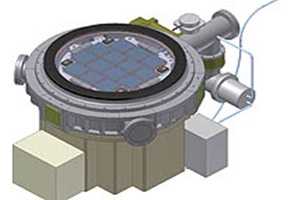 “[The camera] will obtain low-resolution spectral information from every pixel, something akin to observing the whole northern sky through a gigantic prism,” Moles explained. “This enormously rich dataset, which will include hundreds of millions of galaxies, and millions of stars and quasars, will have enormous value for most areas of astrophysics, from cosmology to solar system studies, including galaxy evolution and stellar physics.”

In particular, the J-PAS survey will aim to measure the red-shift of 14 million early-stage galaxies, by viewing them through 56 continuous wavebands across the 350-1000 nm spectral range. That should allow astronomers to map galaxy distribution according to red-shift (and therefore distance from Earth) in three dimensions and with unprecedented precision.

In e2v’s most recent financial statement, the firm’s CEO Keith Attwood had said that while demand for defense applications was softening in Europe, scientific end user demand remained healthy.

Just last week the company said that it had signed another “multi-million Euro” contract, this time to manufacture and supply high-end CMOS imaging sensors for the third generation of “Meteosat” weather satellites being built by Thales Alenia Space, including supply chain management.

The e2v detectors will feature in the Flexible Combined Imager (FCI) instruments on board the series of six geostationary satellites, which are designed to provide better spatial, temporal and radiometric weather data than the current Meteostat constellation. The new satellites are slated for launch from 2017 onwards.