Twin IR detectors mounted under an airplane's wings can spot dangerous ash particles from 100 kilometers away. 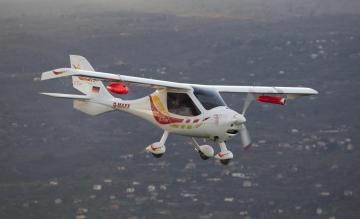 The only people more keen than airline passengers to avoid a repeat of what happened when Iceland's Eyjafjallajokull volcano erupted in April 2010 are the airlines themselves. But accurately spotting the specific airborne ash particles that pilots must steer clear of is not easy, even from the ground. Doing so with a system mounted on the airplane and under the pilot's control is a real technical challenge.

A new infrared imaging system developed by Nicarnica Aviation and supported by EasyJet has just been trialed on a light aircraft over Mount Etna in Italy, and the results look promising. The AVOID (Airborne Volcanic Object Infrared Detector) sensor uses two uncooled passive infrared imaging cameras, one on each wing, to scan the sky ahead and provide information back to the pilot in real-time imaging.

"In the AVOID system we have put interference filters behind the camera lenses, allowing it to take two near-simultaneous images at different wavelengths," said Fred Prata, technical director at Nicarnica and senior scientist at the Norwegian Institute for Air Research (NILU), from which Nicarnica is a spin-out. "Each camera has one filter designed with a specific bandpass to isolate the signature of silicates, the main component of ash which does the damage to airplane engines. The images are compared and an algorithm works out whether it is looking at ash or, as is more usually the case, clouds."

It turns out that this IR imaging approach has its maximum sensitivity for particles of around 6 microns radius, and AVOID uses an overall IR window of 7 to 13 microns. The most damaging ash particles measure between 3 and 12 microns - so they are squarely in AVOID's sights. "We can't say much about the bigger particles over 16 microns, or the smaller ones measuring less than a micron," commented Prata. "But then these are not the problem for jet engines."

The developers believe that AVOID should be able to detect hazardous particles in the airspace up to 100 km ahead of the aircraft, day or night, giving the pilot up to ten minutes prior warning in which to take suitable avoiding action.

AVOID has some distinct advantages over other potential solutions, according to Prata. "An on-board LIDAR system could detect the particles and give more range information than our passive system, but with current LIDAR technology this can't be done on an aircraft flying at 800 kmh at 33,000 feet. An in-situ system to measure the particles once the plane is actually flying through them is under development, but this does not seem like the best solution."

A third alternative is remote sensing based on ultraviolet detection of SO2, a common constituent of volcanic clouds. But this would not detect the harmful ash particles directly, and also needs sunlight, rendering it impractical for use at night or in low visibility conditions.

Prata has many years' experience studying remote sensing and atmospheric research at NILU and before that at Australia's CSIRO. He believes that as well as helping pilots to stay out of trouble, AVOID could gather valuable information about the general behavior of volcanic clouds and help in understanding how they disperse in the atmosphere. Accurate information from AVOID about the densities of airborne ash should lead to improved algorithms for assessing how much ash volcanoes eject into the atmosphere in the first place, improving the accuracy of ground- and space-based ash tracking systems.

In the meantime, AVOID could be installed on an Airbus A320 in mid-2012, and potentially be ready for EasyJet's forthcoming route to Iceland also scheduled for next year. "EasyJet has been helping with the development and expressed a wish to buy up to 20 systems should the prototype be approved, but there is no exclusivity," commented Prata. "We can work with any airline, avionics company, engine manufacturer or aircraft maker. The problem is global, and especially acute in Southeast Asia where aviation is growing fastest and where there are many dangerous volcanoes. The next planned field trial will be early next year in Papua New Guinea, again using a light aircraft."