Stock drops sharply after company cautions that its fiscal 2012 sales will be below prior expectations. 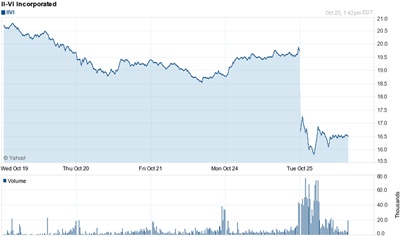 The diversified optics and materials company II-VI lost nearly one-fifth of its stock value after cutting its financial guidance for fiscal year 2012.

In its earnings report for the opening quarter of FY2012, CEO Frank Kramer also said that the company would be affected by the severe flooding that has disrupted manufacturing at Fabrinet – although it is too early to quantify that impact just yet.

The various brands that make up II-VI sell a wide variety of products into a very broad applications base, although one of the most significant product lines is for infrared optics used in CO2 lasers. Kramer indicated that while demand for high-power lasers used in materials processing applications remained solid, there were some emerging concerns about the long-term strength of the manufacturing sector.

In contrast, monentum for optics used in low-power lasers has weakened, and in one semiconductor application - via hole drilling for PCB production - demand was said to have “stalled”.

ISR focus
The expected cuts to the US defense budget remain a concern, but II-VI is confident that its focus on intelligence, sensing and reconnaissance (ISR) applications will protect it from the worst of those cuts. For II-VI overall, Kramer is predicting a flat performance in military applications this year, although the company’s Exotic Electro-Optics (EEO) subsidiary, which specializes in high-performance infrared crystals, optical components, coatings and assemblies, is expected to post double-digit growth.

Capacity at another subsidiary, China-based Photop Technologies, is now being expanded with the addition of three new coating machines, as demand for its crystals and optics remains robust. Photop is one of the II-VI businesses that is affected by the recent floods that have closed Fabrinet’s Chokchai facility in Thailand. It sells components to Fabrinet that are used in optical assemblies, and described by Kramer as “sitting in the water” in an investor call to discuss the Q1 results.

Another II-VI subsidiary, the recently acquired Aegis Lightwave, uses Fabrinet’s Chokchai site to contract manufacture components like optical channel monitors and beam couplers, for telecommunications and fiber laser applications respectively. Kramer said that it was too early to tell how much impact the floods would have, although the company is already evaluating alternative manufacturing options at Aegis’ design and prototyping sites in Canberra, Australia and Boston, Massachusetts.

Solar bankruptcy hits earnings
For Q1 of its FY2012, II-VI posted sales of $138 million and net earnings of $18.6 million – slightly below estimates. Bookings of $130 million represented a 16% increase on the equivalent quarter last year, but down very slightly on a sequential basis.

II-VI added that its earnings in the just-reported quarter were impacted by the high-profile bankruptcy of an unspecified CIGS solar company, in an apparent reference to Solyndra. II-VI had recently begun supplying the company with selenium, one of the four elements that feature in thin-film CIGS panels. A one-time charge relating to that bankruptcy and high commodity prices dragged down profitability, said Kramer.

On a more positive note, II-VI appears to be gaining ground in medical applications, although this remains a small part of the company’s overall revenue base. Kramer pointed to demand for its optics growing from laser applications in aesthetic and ophthalmic procedures – including cataract surgeries, which look like becoming a major growth area. The company’s EEO subsidiary is also now ISO-qualified for medical device assemblies, and has an order for an ophthalmology application.

For the current quarter, revenues are expected to remain flat or fall slightly, in the range of $133 million to $138 million.