Newport bullish on life sciences for 2012

Company reports strong interest in its new ultrafast lasers as well as a boost provided by its recent acquisitions.

Newport CEO Robert Phillippy has picked out the life and health sciences sector as a likely strong performer in 2012, with the company confident of weathering a downturn in the microelectronics industry. 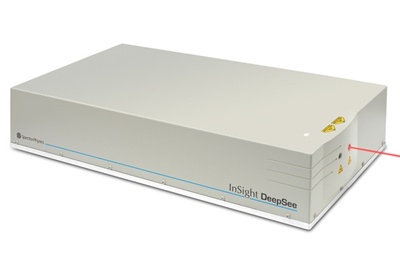 Now with a more balanced portfolio following its acquisitions of High Q Laser and Ophir Optronics in recent months – microelectronics now accounts for around one-quarter of Newport’s business, where it was previously one-third – Phillippy reported strong interest in the company’s new ultrafast lasers while delivering details of Newport’s latest financial results.

That includes the new tunable InSight DeepSee laser, which is used in multiphoton microscopy applications, and the Spitfire Ace ultrafast amplifier, used in nonlinear spectroscopy.

In Q3, Newport saw the benefit of its High-Q Laser acquisition for the full quarter, which pushed sales from its life and health sciences business to an all-time record. High-Q’s ultrafast lasers are also proving popular, and being adopted in surgical applications, where the company sells to OEM customers.

The nature of that business means that orders and sales can be somewhat lumpy, but added to strong general momentum in bioinstrumentation and the emerging “digital dentistry” technology being developed by Ophir, Phillippy told investors: “We are really, really bullish about life and health sciences.”

As expected, with the semiconductor industry entering a slump of as-yet-unknown depth and length, Newport saw both sales and new orders for this sector drop sharply, and it has already taken some cost-cutting measures within its Spectra-Physics laser division to help compensate.

“Although market conditions in [the semiconductor] industry have slowed, we are confident that the revenue from [our] acquisitions, combined with our organic growth initiatives, will more than offset the effects of this slowdown, enabling us to deliver year-over-year sales growth in 2012,” the CEO said. 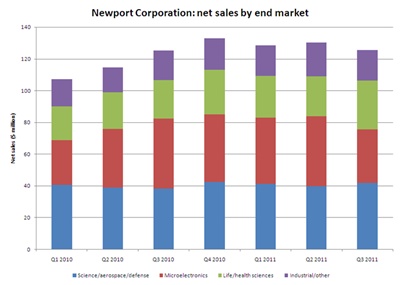 While that downward trend in microelectronics will likely continue into the closing quarter of the year, seasonal strength and a boom in orders for scientific, defense and aerospace applications will largely offset the decline, Newport said. In Q3 it saw orders from the scientific sector in Japan jump 24% as the country released new funding for research. 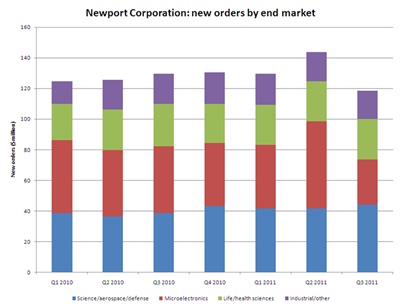 On target for 20% sales CAGR
Overall, Newport posted sales of $125.6 million for Q3, down sequentially because of the semiconductor impact but up very slightly from the same period last year – although the latest figures included some $4.5 million in sales attributable to High-Q.

Orders of $118.6 million in the latest quarter were down 8% year-on-year, again largely attributable to the decline in semiconductor industry spending on capital equipment.

Looking to 2012, Phillippy said that the combination of organic growth and acquisitions was keeping the company on track to meet its strategic goal of posting compound annual sales growth of 20%. In the closing quarter, which will be boosted by the inclusion of Ophir’s results, it is expecting to post sales of between $160 million and $165 million, meaning that sales for the full fiscal year 2011 should reach around $545 million.

A full 12 months of Ophir and High-Q contributions this year would have resulted in sales of at least $650 million, and Phillippy says that he is confident that Newport will beat that figure in 2012. If he’s right, then Newport will indeed have shown compound annual growth of 20% over the 2009-2012 period (the company posted annual revenues of $367 million in fiscal 2009).

With a new credit facility in place but existing debt still on its books (what CFO Charles Cargile refers to as a “double debt”), Newport will be paying $4 million quarterly interest charges until it pays off its $127 million convertible notes in February – at which point the quarterly interest payments will fall to $2 million.

• Newport’s stock rose more than 15% in early trading following the company’s results announcement, to around $14 and a market capitalization of approximately $525 million.