Solar wafer manufacturer suspends polysilicon production, saying that the expected year-end rally 'does not appear to be materializing'. 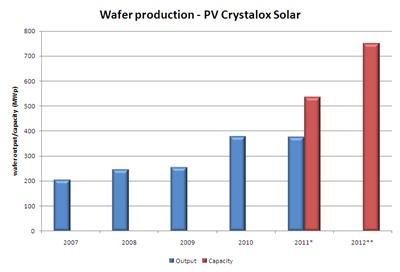 PV Crystalox Solar, the manufacturer of silicon wafers for solar cell applications, is cutting ingot and wafer production at its sites in the UK and Germany, and suspending production temporarily at its polysilicon facility, also in Germany.

The moves, which the firm says will lead to “significant” job losses in the UK, is in response to a weaker-than-expected recovery in the photovoltaics end market and intense pricing pressure caused by a vast industry oversupply.

Those price falls – Crystalox says that the spot-market price of solar wafers has dropped more than 50% in the past six months – had been expected to stimulate a strong rally in European markets towards the end of this year, ahead of expected cuts to feed-in tariffs at the start of 2012.

But, citing German weakness in particular, Crystalox said: “The hitherto expected year-end rally…does not appear to be materializing.”

It added that some customers have now reduced their production in response to the weak market conditions, and that it would be mothballing operations in a bid to conserve cash.

As recently as August it had reported a “strong” performance in the first half of 2011, despite the difficult market conditions, and indicated that a further capacity expansion to 750 MW, at a cost of €10 million, was under way and set to be completed in early 2012.

Strong cash position
On top of the expected job losses in the UK, the suspension of operations in Germany will result in short-time working. Crystalox will also seek to reduce its costs through discussions with its own suppliers.

The impact of weak demand and pricing pressure amid huge production ramps at Chinese rivals, many of whom are vertically integrated and make cells and modules as well as wafers, forced Crystalox to bring forward its interim management statement for the second half of 2011. The London-listed company now expects to report an operating loss this year – although its cash position is strong, with nearly €84 million in liquid assets listed on its balance sheet as of 30 June 2011.

Last week, industry analyst Solarbuzz estimated that there has been a $6 billion overspend on PV manufacturing equipment, one obvious indicator of the recent over-investment in capacity. Equipment spending will peak at just over $13 billion this year before slumping 45% in 2012, it predicted.

Almost half of the 2011 spend has been due to either new entrants or second- and third-tier manufacturers seeking to grow revenues simply by adding more capacity, Solarbuzz said, and largely unnecessary: “The majority of this investment has turned out to be supplemental to the capacity required to meet short-term industry demand.”

And although those equipment vendors with strong order backlogs in Asia will be shielded from the sudden decline in revenues next year, many will see their sales drop by up to 70%, and a spending downturn extending into 2013.

Shares in Crystalox fell sharply on October 21 after it announced the production cutbacks, as the company lost approximately one-third of its value.