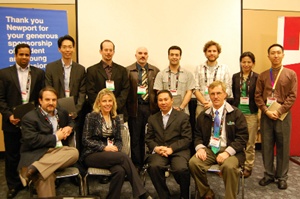 Nineteen researchers with an eye on setting up a new venture went head-to-head in front of a panel of judges, with only the top three “elevator pitches” being selected for sponsorship at the UC Davis Biomedical Engineering Entrepreneurship Academy.

Technologies in those pitches ranged from optical drug delivery systems, to wearable muscle oxygenation sensors and a liquid-crystal pupil designed for prosthetic eyes. But in the end it was a simple test to screen for lung cancer – for which there is no existing screening method beyond a traditional biopsy – that grabbed the first prize.

Northwestern University research associate Hariharan Subramanian scooped the first prize after a confident pitch highlighting a 92% accurate cheek-swab test based on partial wave spectroscopic microscopy. The judges, who included Linda Smith from CeresTech and Sergey Egorov from Tech Coast Angels, were also impressed by the exclusive licence for the technology, which is based on two approved patents. Subramanian pointed out that the market for such a screening method could be worth $5 billion – similar to the existing market for cervical cancer screening.

Second place, and also a place at the UC Davis academy, went to post-doc Chang Won from Temple University, for another optical method aimed at detecting malignant tumors – a recurring theme among the pitches. Won’s so-called “tactile imaging system” is based on total internal reflection, and can pick up signs of early-stage malignancies at a depth of 3 cm.

The final academy place went to Natan Shaked, a post-doc researcher at Duke University who has developed a small interferometric microscope that he says can be used to detect diseases including malaria. At a cost of less than $500, Shaked added that the portable instrument could ultimately be integrated within a simple, cell-phone sized handset.

The prize for the three winners, sponsored by Newport Corporation, is a five-day academy at UC Davis to help construct a business case, analyze markets and develop a network of connections to set up a new business venture.