Ten years in the making, the five-point laser 'constellation' forms the key element in an adaptive optics system that will generate ultra-sharp astronomical images. 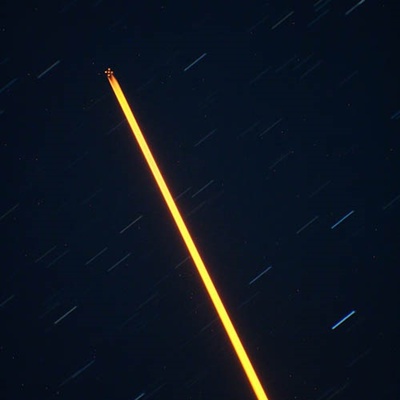 A laser system built by Lockheed Martin Coherent Technologies has added five new “stars” to the night sky above Chile, as part of an advanced optical system that will enable astronomers to capture ultra-sharp, wide-field images.

The so-called laser guide stars – actually sodium atoms high in the atmosphere glowing after being elevated into excited states by the 50 W laser – are the key part of a cutting-edge adaptive optics system that will significantly reduce the “blurring” effect caused by turbulence in the Earth’s atmosphere.

In the early morning of January 22, astronomers witnessed the first propagation of the Gemini South telescope laser system, with the five guide stars captured on camera through a small telescope (see right).

Céline d’Orgeville, who has overseen the laser’s development and endured four sleepless nights on the mountain to make sure that the guide stars saw ‘first light’, said of the milestone: “This amazing picture illustrates the culmination of a laser development program that started about ten years ago.”

Although the guide stars are not the first to appear above the Gemini observatory - the Chile site’s North telescope and a partner instrument at the summit of Mauna Kea in Hawaii also use the technique – this latest system is the first to use a constellation.

Producing five stars by splitting the master laser beam into five different paths required more basic power, and a specialist laser – needed to emit at 589 nm to excite sodium atoms. “Sodium laser guide star photons are very expensive to create,” d’Orgeville said. “The 50 W Gemini South laser procurement cost alone was $3.7 million, not including all the telescope infrastructure to house it and to project the laser beams to the sky.”

In fact, d’Orgeville reckons that acquiring the specialist laser technology represented the single most challenging aspect of the entire project. “Until recently there were plenty of people interested in developing various laser technologies able to produce 50 W at 589 nm in the lab, but, understandably (due to the small market size), no reliable, commercial laser vendors interested in building a fully-engineered sodium laser for laser guide star adaptive optics applications.”

Although the guide star constellation is not visible to the naked eye – the image shown here was taken with a 30 second exposure time – scattering of the high-power beam in the lower atmosphere is clearly visible.

Right now, the guide stars represent just the first part of the Gemini Multi-Conjugate Adaptive Optics (MCAO) system, which will be integrated and commissioned during 2011 and completed in 2012, with ‘first light’ for the upgraded telescope later next year. 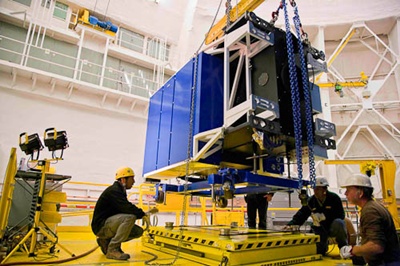 Galaxy dynamics
After that, the system should begin providing remarkably sharp images to advance the study a wide range of topics, including the birth and evolution of stars to the dynamics of distant galaxies, say the Gemini team. Under normal circumstances, atmospheric turbulence makes this level of detail impossible to see through a terrestrial telescope, instead demanding precious time on space-based telescopes such as Hubble or the James Webb telescope that is currently in development.

The optical approach used in MCAO is said to be revolutionary, even within the field of adaptive optics. It samples the turbulence structure in the atmosphere at several altitudes, and reconstructs the distortion that results using a technique similar to medical tomography.

That reconstruction pattern is then used to shape a series of deformable mirrors, which cancel out the atmospheric distortion at a repetition rate of about 1 kHz.

The technique will not only enable better spatial resolution on astronomical images but also better detection sensitivity, as it will be possible to detect more and fainter stars in a crowded field, and MCAO will be able to perform this over a field of view up to 20 times larger than is normally possible.

This kind of system is expected to be widely used in future generations of extremely large telescopes with mirror diameters of 30 meters or more. Because those telescopes will image through such a wide column of air, they will suffer from additional atmospheric turbulence, and will need the latest in adaptive optics to ensure that images are produced with sufficiently sharp resolution for top-level astronomy.