Laser pulses could help to reveal details of molecular dynamics. 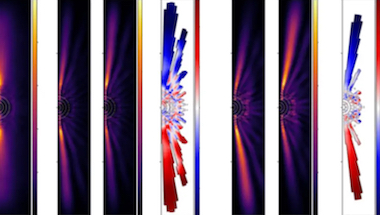 Action of a laser pulse reveals evidence of chirality

A project led by Spain's ICFO photonics research center has developed an ultrafast technique for the imaging of molecular chirality with extremely high temporal resolution.

The dynamics of chiral molecules plays a key role in determining how they interact, but successfully imaging different chiral systems has remained difficult, particularly in live cell environments.

Suitable techniques must be capable of ultrafast snapshots, in order to capture how electrons and nuclei rearrange during a chemical reaction.

But although short laser pulses can provide the required time resolution, the interpretation and reconstruction of the molecular dynamics from the obtained data and measurements is difficult for systems involving more than a couple of nuclei.

Previous attempts to solve the problem have included studies at Durham University exploiting the way that circularly polarized light emitted by luminescent chiral molecules can contain information about the molecular environment, conformation, and binding state. However, optical rotation effects are intrinsically weak, according to ICFO, making their extension to the ultra-fast regime very challenging.

The new approach, published in Physical Review Letters, involves the photoionization of a chiral molecule using a very short and intense 800-nanometer infrared pulse, a phenomenon said to be unexploited for this particular purpose until now. A temporal resolution on the order of 10-16 seconds could be possible using this method.

Spotting the evidence of chirality

"The energy of the photons of this pulse are not enough to ionize the molecule, but the intensity of the pulse is so strong that the molecule can absorb several photons at once," commented project member Andres Ordoñez of ICFO.

"The ionization caused by such a pulse is better understood as the electric field of the pulse being so high that it basically rips away the electron from the molecule. But before being ripped away, the electron cloud has a shape determined by the chiral nuclear arrangement of the molecule."

Despite the severe deformation that the electron cloud suffers as it is ripped away from the molecule, its structure conserves an imprint of the initial state and consequently of the chirality of the molecule. ICFO quantified this structure by monitoring the orbital angular momentum (OAM) of the electron cloud and the direction in which it flies away from the molecule, which effectively carries information about the original chirality.

"Strong-field ionization of a chiral target with a few-cycle linearly polarized laser pulse yields photoelectron vortices, whose chirality reveals that of the target," noted the project in its published paper.

The ICFO study, said to be the first theoretical examination of the OAM of free electrons for its role in photoionization of chiral molecules, will now be developed by the researchers with a view to demonstrating the results in a practical attosecond-scale experiment. The method may also indicate ways to improve descriptions of chiral molecules, which at present do not include important aspects such as the anisotropy of the molecular potential, or recollision scenarios.

"While it is way too early to claim that the particular effect that we found will revolutionize sectors, such as the pharmaceutical sector, we are certain that, at the very least, it will inspire further research into molecular chirality," said ICFO's Maciej Lewenstein.