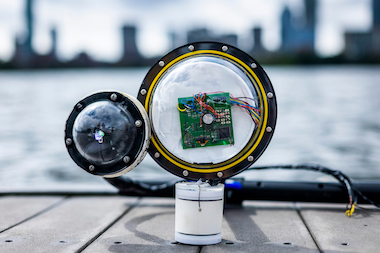 Swims with the fishes: wireless camera

Most established methods for underwater imaging require tethering for power and communication, making them less suitable for long-term in situ observations.

A project at MIT has now developed a battery-free wireless imaging platform that might give new insights into the underwater environment, and is suitable for extended ocean deployments.

As described in Nature Communications, the project's solution is termed underwater backscatter imaging, and is powered by sound, converting mechanical energy from sound waves traveling through water into electrical energy for its imaging and communications equipment.

The camera acquires this energy using piezoelectric transducers placed around its exterior, which can in theory be driven by sound waves from any source, such as a passing ship or marine life. The camera stores harvested energy until it has built up enough to power the electronics that take photos and communicate data.

To keep power consumption as a low as possible, the researchers used off-the-shelf, ultra-low-power imaging sensors. But these sensors only capture grayscale images, and since most underwater environments lack a light source, they needed to develop a low-power flash too.

"We were trying to minimize the hardware as much as possible, and that creates new constraints on how to build the system, send information, and perform image reconstruction," commented Fadel Adib from MIT Media Lab. "It took a fair amount of creativity to figure out how to do this."

The solution was to employ red, green and blue LEDs. To capture an image. the camera first shines a red LED and then repeats the operation with green and blue illumination. Image data is sent to a remote receiver using a transmission method termed piezo-acoustic backscatter, involving the modulated reflective behavior of a piezoelectric transducer.

Once the receiver receives each one-color LED-illuminated image, "the receiver synthesizes the received packets into multi-illumination pixels by applying them to the RGB channels of a digital pixel array to reconstruct color images," noted the project in its published paper.

This approach has the advantage of consuming very little power, in a platform where harvested energy is expended in cycles that alternate between imaging and communication, and the entire energy budget can be harvested from underwater acoustics, according to the project team.

In trials, the camera was used to take color images of plastic bottles floating in a New Hampshire pond, and high-quality images of an African starfish where tiny tubercles along its arms were clearly visible. The device was also effective at repeatedly imaging the underwater plant Aponogeton ulvaceus in a dark environment over the course of a week to monitor its growth.

Because it requires no external power source, MIT believes the camera could run for weeks before retrieval, enabling scientists to search remote parts of the ocean for new species, capture images of ocean pollution or monitor the health and growth of fish raised in aquaculture farms.

"One of the most exciting applications of this camera for me personally is in the context of climate monitoring," said Fadel Adib. "We are building climate models, but we are missing data from over 95 percent of the ocean. This technology could help us build more accurate climate models and better understand how climate change impacts the underwater world."