Lithography system vendor sees no let up demand, despite geopolitical and inflationary pressures. 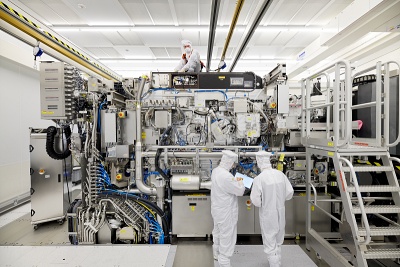 The Netherlands-headquartered company, which holds a key strategic position as the sole provider of extreme ultraviolet (EUV) lithography systems needed to pattern the world’s most advanced semiconductor devices, is expecting revenues to rise 25 per cent this year.

If correct, that would represent an acceleration on the rate of growth witnessed last year. ASML has just reported record full-year sales of $21.2 billion for 2022, up 14 per cent on the 2021 total.

That positive outlook also comes at a time when many of ASML’s customers are reducing their chip output amid a slump in demand in some sectors, and rising inventories of stockpiled devices.

“On top of that we see a weaker demand for consumer-related products such as smart phones and PCs. We see some lower growth rates in the data center domain, but strong demand still in the industrial space, for instance automotive.”

Despite that apparent slowdown, something confirmed by ASML’s own data showing lower utilization of its installed equipment, chipmakers are still placing orders for new lithography tools.

“Our customers are swiftly adapting their output to reduce inventory,” noted Wennink. “By doing that they hope and they expect that the industry will then recover in the second half of the year.

“There is expectation that the industrial activity and thereby semiconductors will actually go up again in the second half of the year. So all in all, customers are expecting a better second half of 2023.”

For ASML, the upshot is that demand for its tools still far outstrips the rate at which the company is able to produce and deliver them.

“It’s a very simple conclusion that the expectation of the duration of a potential recession in the minds of our customers is much shorter than the average lead time of our machines,” said the CEO, who is expecting ASML to ship 60 of its laser-driven EUV machines and 375 deep-UV (DUV) tools this year.

“If you split it out over the different business sectors, then you’ll see that [our] EUV business will probably grow about 40 per cent, [and] the non-EUV business about 30 per cent,” he said, although the current decline in fab utilization rates will inevitably mean fewer field upgrades and lower service revenues.

Export controls
On the subject of export controls, which currently mean ASML is unable to sell its EUV equipment to customers in China (though sales of DUV and inspection tools are unaffected), Wennink said that despite recent high-level talks involving the Dutch prime minister Mark Rutte, the situation had not changed materially since last October, when the US imposed additional trade controls on China.