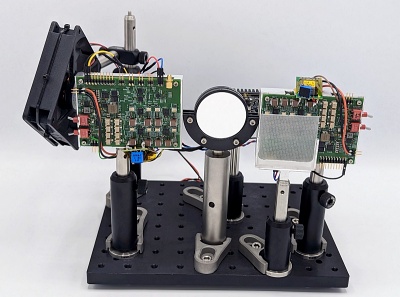 An industrial collaboration involving major contract manufacturer Jabil, alongside ams Osram and Artilux, has come up with a novel 3D camera that is said to operate equally well in both indoor and outdoor applications.

The prototype camera features novel vertical cavity surface-emitting lasers (VCSELs) from ams Osram that operate at the longer wavelength of 1130 nm, alongside germanium-on-silicon (GeSi) sensors from Artilux to provide a range of 20 meters in either scenario.

Florida-headquartered Jabil is hoping that the development will help to usher in a new era of 3D cameras that are capable of operating in virtually any lighting environment.

Ian Blasch, senior director of business development for Jabil’s 170-person optics division, said: “For too long, industry has accepted 3D sensing solutions limiting the operation of their material handling platforms to environments not impacted by the sun.

“The new SWIR camera provides a glimpse of the unbounded future of 3D sensing where sunlight no longer impinges on the utility of autonomous platforms.”

Eye safety
Critical to the development is the incorporation of novel laser emitters operating at an unusually long wavelength, and GeSi detectors that can be mass-produced using a standard silicon CMOS process.

Stanley Yeh from Taiwan-based Artilux added: “We are glad to work with Jabil and ams Osram to deliver the first mid-range SWIR 3D camera with the use of near infrared (NIR)-like components such as CMOS-based sensor and VCSEL.

“It's a significant step toward the mass-adoption of SWIR spectrum sensing and being the leader of CMOS SWIR 2D/3D imaging technology.”

‘Solution gap’
According to a presentation from Jabil Optics, the company identified a “solution gap” in the capability of current 3D cameras, which tend to either offer very short ranges of less than 5 meters, or much longer than 20 meters.

Although simple in design and low in cost, the shorter-range cameras tend not to operate well in ambient light, while the long-range systems are typically complex and expensive designs that deliver low image resolution.

In outdoor applications there is the additional challenge of direct sunlight, something that also presents an issue for developers of automotive lidar systems. This can be overcome to varying extents by using emitter wavelengths that match gaps in the solar spectrum, for example at 940 nm, 1130 nm, and 1380 nm.

The longer wavelengths have a major advantage here, because eye safety regulations permit the deployment of significantly higher laser power than at 940 nm (especially at 1380 nm).

$4BN SWIR camera market emerging
Jabil says that it tested a variety of sensors from Artilux and Israeli startup TriEye in different conditions, before finding that the 1130 nm wavelength had a key advantage: human skin is much more reflective at 1130 nm than it is at 1380 nm, making the latter option unsuitable for depth calculations.

“[The] 1130 nm proof-of-concept was able to detect human skin, a clear advantage over higher SWIR wavelengths for applications that interact with humans,” reported the firm.

With component suppliers expected to release several new SWIR technologies over the next couple of years, Jabil believes that its demonstration can open up new market opportunities taking advantage of different wavelengths for different use cases.

A recent market report from Yole Intelligence suggests the emergence of a $4 billion market for SWIR cameras by 2027, propelled largely by consumer applications of 3D sensing modules.