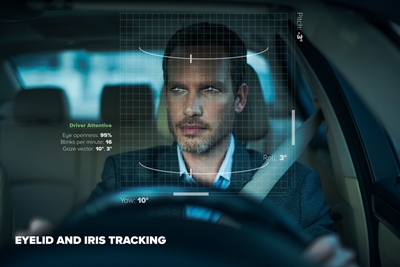 Using a combination of infrared and time-of-flight sensors, the envisaged system will be able to identify drivers by facial recognition, gender, and age, while monitoring attentiveness to the road by assessing their head pose, posture, and mood, as well as tracking eyelid movements associated with falling asleep at the wheel.

Sleep-related road deaths
According to the UK’s Department for Transport, around one in every five accidents on major roads are sleep-related, and are more likely to result in death or serious injury than other causes.

The UK’s Royal Society for the Prevention of Accidents adds: “These types of crashes are about 50 per cent more likely to result in death or serious injury as they tend to be high-speed impacts, because a driver who has fallen asleep cannot brake or swerve to avoid or reduce the impact.”

eyesight, which sells embedded machine vision technology across a variety of markets including virtual and augmented reality and consumer electronics, has developed ways to assess different aspects of a driver’s behavior, including their gaze and gestures.

That includes tracking the movement of eyelids, irises, and head position – where a tilt is likely to indicate fatigue.

Innoviz lidar connection
eyesight and Jabil say that the combined hardware and software system under development will offer “sub-pixel” accuracy, enabling higher-resolution driver monitoring than has been possible thus far. “The accuracy of the camera modules, together with intelligent software, allows the system to be smaller, resulting in reduced weight and footprint,” they add.

The system is also intended to support gesture control of electronic in-car systems.

Jabil is also working closely with Innoviz Technologies, another Israeli startup targeting the automotive industry, this time with lidar technology for autonomous vehicles that promise to do away with human error entirely, by letting robots do the driving.

Innoviz raised $9 million in series A venture funding almost exactly a year ago, and earlier this year it entered into a manufacturing agreement with Jabil to produce solid-state lidar modules intended for research and testing activity in the autonomous driving space.

Mass production of initial devices is expected in early 2018, followed by sampling of a high-definition version a year later.