CMOS-based platform brings imaging and ranging together for automotive and other applications. 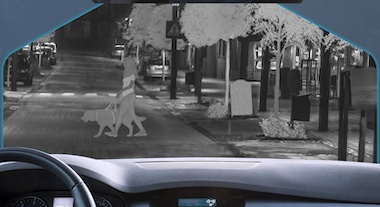 SWIR on board: automotive vision systems

TriEye, an Israel-based developer of shortwave infrared (SWIR) imaging sensors, has announced the launch of its SEDAR, or spectrum enhanced detection and ranging, platform.

Development of the SEDAR technology, backed by investment from Intel, Samsung and Porsche, builds on TriEye's research into CMOS-based SWIR devices, intended to offer an alternative to established but expensive InGaAs SWIR sensors.

The platform was demonstrated at the 2022 CES event in Las Vegas, when the company agreed a collaboration with automotive parts provider Hitachi Astemo as a route for SEDAR's adoption in advanced driver assistance systems (ADAS) and autonomous vehicle vision systems.

TriEye has now announced an official launch for the product and said that SEDAR will be showcased again at the next CES show in January 2023.

"Developed through a decade of research at Hebrew University in Jerusalem, SEDAR combines a SWIR image sensor and laser illuminator on a single platform, which delivers unmatched high spatial resolution long-range imaging and depth sensing in all lighting and weather conditions," commented TriEye CEO Avi Bakal. "Smaller in size, higher in resolution and easier to integrate than other sensor technologies, SEDAR provides an entirely new sensing modality."

CMOS SWIR sensors are intended to be a route for shortwave sensing to expand into new markets and consumer applications, sectors where the cost of InGaAs sensors has made adoption more difficult. A CMOS-based SWIR device compatible with standard CMOS manufacturing workflows is expected to allow a considerably less expensive imaging system.

A recent market survey by Yole Développement indicated that the market for SWIR cameras is about to see significant expansion, from $429 million in 2021 to over $4 billion in 2027. One major engine of that growth is due to come from the use of 3D sensing modules in consumer applications, a sector expected to reach $3 billion and be largely facilitated by new sensor technologies.

SEDAR incorporates a SWIR light source and imaging sensor into the same device, enabling imaging and 3D mapping of the environment for vehicles as an alternative to the lidar systems currently employed by autonomous control systems or driver assistance devices.

The system can be seamlessly integrated with existing ISP and AI algorithms, according to TriEye, removing the barriers of training and any need to develop new object classification algorithms, and is unaffected by other illumination sources, including sunlight and light from other devices and oncoming vehicles.

"By reducing the system cost compared with lidar by more than a factor of ten and providing a technology capable of enabling a vehicle to sense the world around it, monitor its environment and react accordingly, within affordable reach of all automotive manufacturers, TriEye's SEDAR system will democratize advanced road safety," commented Avi Bakal.

The company intends its platform to be equally suited to use by consumer products such as vacuum and lawnmower robots, as well as in smartphones and other head-mounted mobile devices in augmented and virtual reality applications, new uses contributing to the revenue growth expected by Yole.

"SEDAR provides a readymade bolt-on solution to deliver a step change for commercial vehicles operating in busy and potentially hazardous environments such as construction, agriculture and mining," said the company.