Miniaturized analyzer prepares to join search for life on other worlds

University of Maryland device has been tailored to suit needs of NASA space missions. 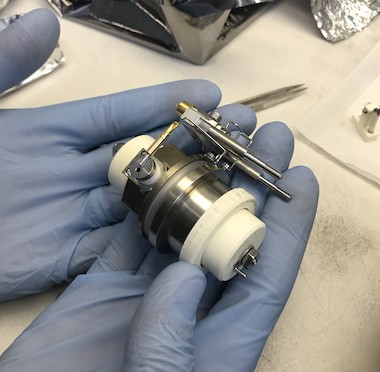 The latest use of laser technology in the hunt for signs of biological activity elsewhere in the solar system is taking shape via a project led by the University of Maryland (UMD).

It has developed a miniaturized analysis platform designed for planetary exploration, intended to both meet the performance standards of commercial systems and exceed key baseline performance criteria for near-term forthcoming space missions.

As described in Nature Astronomy, the project's device exploits the potential use of laser desorption mass spectrometry (LDMS) to carry out in situ characterization of the organic content and chemical composition of planetary materials without requiring extensive sample processing. LDMS involves vaporizing and ionizing a sample using a high-energy pulsed laser, followed by mass spectrometry.

The UMB platform combines LDMS with an Orbitrap analyzer module, a form of ion trap mass analyzer in which ions under study are caught in an orbital motion around a central spindle.

When in use, a pulsed ultraviolet laser will remove small amounts of material from a planetary sample and an Orbitrap analyzer will then deliver high-resolution data about the chemistry of the examined materials, both functions carried out in an instrument weighing around 7.5 kg.

"The Orbitrap was originally built for commercial use," said Ricardo Arevalo of UMD. "You can find them in the labs of pharmaceutical, medical and proteomic industries. The one in my own lab is just under 400 lbs, so they’re quite large. It took us eight years to make a prototype that could be used efficiently in space; significantly smaller and less resource-intensive, but still capable of cutting-edge science."

The device marks a further evolution of laser-based analysis techniques for space missions, following examples such as LZH's Mars Organic Molecule Analyser, also designed to convert soil samples into a gas phase through the action of a laser and then carry out mass spectrometry.

However, pairing an Orbitrap with LDMS represents a combination of techniques that have yet to be applied in an extraterrestrial planetary environment, according to Arevalo.

UMD intends its Orbitrap LDMS device to be suitable for a range of upcoming NASA high-priority mission concepts, both those focused on life detection such as the Enceladus Orbilander concept, and continuing progressive exploration of the lunar surface including the Artemis Program. The goal is to send the device into space and deploy it on a planetary target of interest within the next few years.

One advantage of the LDMS-based design should be that researchers gain access to larger and more complex compounds that are more likely to be associated with biology. Smaller organic compounds like amino acids are more ambiguous signatures of living processes, having potentially been brought to a planet's surface by meteorites instead.