Partnership with EPFL has installed laser system on Mount Säntis in Switzerland. 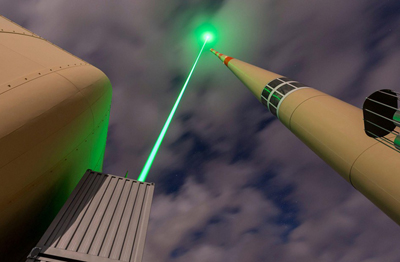 Guiding lightning with a high-power laser installed at the top of Mount Säntis.

The consortium – comprising University of Geneva, École Polytechnique (Paris), EPFL, the School of Engineering and Management HEIG-VD, and Trumpf Scientific Lasers – has developed what it calls the Laser Lightning Rod or “LLR”.

After testing the LLR on the summit of Mount Säntis in Appenzell, the researchers now have proof of its feasibility. The rod can deflect lightning over several dozen meters, even in poor weather. The results of this research have been published in Nature Photonics.

By using intense laser pulses to generate channels of ionized air, which is electrically conductive, the LLR guides lightning along its beam. Extending upwards from a traditional lightning rod, it could increase its height virtually as well as the surface of the area it protects.

The LLR project involved the development of a new laser with an average power of one kilowatt, one Joule per pulse and a duration per pulse of one picosecond. The rod, designed by Trumpf Scientific Lasers, is 1.5 m wide, 8 m long and weighs more than 3 tons.

The LLR’s terawatt laser was tested on the summit of Säntis (at a height of 2,502 m) in the vicinity of a 124m-tall telecommunications tower belonging to Swisscom and instrumented by EPFL and HEIG-VD / HES-SO to observe lightning. The tower is one of Europe’s lightning hotspots and is struck about 100 times a year.

The EPFL contribution to the project came from its Electromagnetic Compatibility Lab (EMC), headed by Farhad Rachidi, in the School of Engineering. The EMC researchers studied the initiation of upward lightning discharges, and deployed the experimental facilities for lightning observation in cooperation with the HEIG-VD/HES-SO.

“This was a remarkable experimental achievement because of the multitude of measurement stations located in mountainous region with harsh weather conditions, which each required time synchronization, monitoring, and control capabilities,” said Rachidi. “These simultaneous observations allowed us to corroborate the guiding of the lightning using the high-power laser.”

The laser was activated every time storm activity was forecast between June and September 2021. The area had to be closed to air traffic in advance. “The aim was to see whether there was a difference with or without the laser,” said Aurélien Houard, a research scientist in the Laboratoire d’Optique Appliquée (LOA) and coordinator of the project.

“We compared the data collected when the laser filament was produced above the tower and when the tower was struck naturally by lightning.”

It took almost a year to analyze the colossal amount of data collected. This analysis now shows that the LLR laser can guide lightning effectively.

“From the first lightning event using the laser, we found that the discharge could follow the beam for nearly 60 meters before reaching the tower, meaning that it increased the radius of the protection surface from 120 m to 180 m,” said Jean-Pierre Wolf, UNIGE professor of physics and the study’s last author.

The data analysis also demonstrates that the LLR, unlike other lasers, works even in difficult weather conditions – such as fog (often found at the summit of Säntis), which can stop the beam – since it literally pierces the clouds. This outcome had previously only been observed in the laboratory. The next step for the consortium will be to increase the height of the laser’s action even further. The long-term objective includes using the LLR to extend a 10 m lightning rod by 500 m.