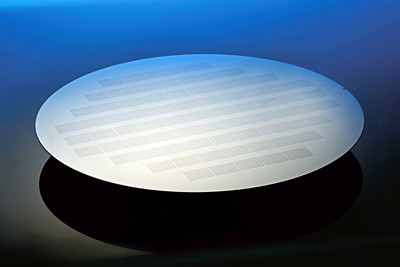 With the aim of making micro-electromechanical systems (MEMS) even more powerful in the future, researchers at the Fraunhofer Institute for Laser Technology (ILT) in Aachen have developed a CMOS-compatible deposition and laser crystallization process in collaboration with the Fraunhofers IST (thin films), and ISIT (silicon).

In contrast to other common processes, this new process eliminates the need for wires and solder joints, an advantage that can significantly reduce the component size and enhance the sensor performance.

One notable market for MEMS sensors is in vehicle safety and control systems; they record many key parameters of vehicle operations – such as airbags, anti-lock brakes or electronic stability programs. MEMS inertial sensors are also incorporated into consumer products such as smart phones and watches, and quadrocopters.

In conventional production, MEMS sensor units are combined with an electronic, application-specific integrated circuit on a silicon wafer. However, because the ambient temperature near the integrated circuit may not exceed 450°C, MEMS sensors made of crystalline silicon are first manufactured separately. Then they are contacted with the circuit via wire and solder connections or wafer bonding processes.

“But conventional interconnection technology requires a relatively large amount of space and prevents further miniaturization of the MEMS,” said Florian Fuchs, a research associate in the Thin Film Processing group at Fraunhofer ILT. For this reason, MEMS made of crystalline silicon cannot be built directly on an ASIC.

Instead of using conventional joining techniques, the ILT is relying on a laser-based process that enables it to build MEMS sensors of crystalline silicon directly (monolithically) on the temperature-sensitive circuits. The development project focuses on the deposition of Si layers by Fraunhofer IST and ISIT, selective laser crystallization by Fraunhofer ILT, and the design and microelectronic processing of the layers into sensors by Fraunhofer ISIT.

The researchers are taking advantage of the fact that amorphous silicon layers can already be produced on the wafer holding the circuit at temperatures below 450°C and high deposition rates. The laser not only crystallizes this silicon layer, but also activates the dopants it contains, thus ensuring suitable electrical conductivity. 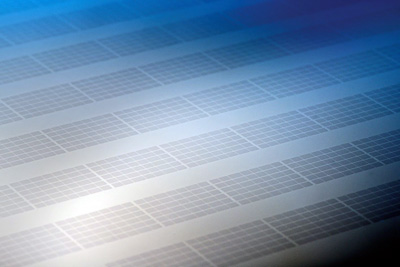 Detailed view of the silicon arrays selectively laser-crystallized by ILT.

When laser radiation is used to crystallize silicon at high-temperature, but below its melting point, crystallization occurs spatially, selectively and very quickly (in the lower millisecond range). This way – in conjunction with targeted temperature management – the process minimizes mechanical stresses in the layer material, but does not damage the sensitive electronics.

Dr. Christian Vedder, head of the Thin Film Processing group at ILT, commented, “Since the energy is quickly introduced into only a small volume, we achieve solid phase crystallization of the silicon with laser processing at temperatures that are actually above the destruction threshold of the underlying circuit. Due to the short local processing time, the circuit is not damaged.”

Florian Fuchs added,“As crystalline silicon layers can be produced under CMOS-compatible conditions on an ASIC wafer, we are opening up new possibilities for integrating MEMS-IC because it is no longer necessary to modify the CMOS manufacturing processes.”

In addition to increasing integration density, the process eliminates wire connections and bond pads, thus leading to expected lower parasitic interference variables and improved shielding against electromagnetic interference fields. This elimination, in turn, has a positive effect on the signal quality and drift behavior of the sensors.