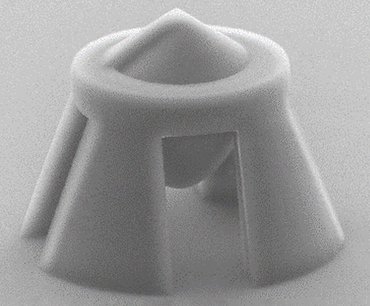 Tailoring the light propagating from optical fibers is potentially a key aspect of multiple photonics applications, especially if the light can be shaped at the point it emerges from the fiber rather than elsewhere in the optical circuit.

A project at Soreq Nuclear Research Center in Israel has now fabricated a tiny multi-component beam shaper directly onto an optical fiber, offering a more compact and inexpensive way to manipulate the emerging light.

"Communication technologies, the internet and many other applications are based on optical fibers," said research team leader Shlomi Lightman.

"When light comes out of the fiber, large bulky optical elements are typically used to route it to the next location. Our approach minimizes both the size and cost for this process by integrating the routing process into the fiber itself."

Fabricating refractive elements onto optical fibers has proven challenging, but the project's solution was to employ the laser printing technique termed 3D-direct laser writing (3D-DLW), a multi-photon lithography operation in which solid structures are created from photoresist materials through application of laser light.

DLW techniques have become increasingly versatile manufacturing methods for optical components, such 3D printed microlenses with adjustable refractive indices that could be used in computing and communications.

The new breakthrough, published in Optics Letters, created a polymer device on the end of a fiber able to turn the output into a twisted Bessel beam, which carries orbital angular momentum and does not expand in space like typical light beams.

"The ability to create a Bessel beam directly from an optical fiber could be used for particle manipulation or fiber-integrated stimulated emission depletion (STED) microscopy, a technique that produces super-resolution images," said Lightman. "Our fabrication method could also be used to upgrade an inexpensive lens to a higher quality smart lens by printing a smart small structure on it."

Although 3D direct laser printing has become an established technique, it was difficult to get the scale and alignment correct when fabricating such small optics on a fiber tip, according to the project.

"We were able to overcome this hurdle by performing highly accurate 2D and 3D simulations before we began the fabrication process," said Lightman. "In addition, we had to carefully think about how to integrate the optical elements with each other and then align that with the fiber core."

With the modelling complete, a commercial 3D-DLW platform was used to print an optical device 110 microns tall and 60 microns in diameter onto a single mode optical fiber. The printed structure incorporated a parabolic lens for light collimation and a helical axicon, or conical, lens to twist the light.

In trials the resulting beam showed very low diffraction, and the laser power could approach 10 MW/cm2 before any damage to the fabricated micro-optical device, showing that relatively high power beams are feasible even though the device was made from polymer rather than glass.

"This work may pave the way for future integrated beam manipulation on fibers, enabling the use of higher laser outputs," commented the project.