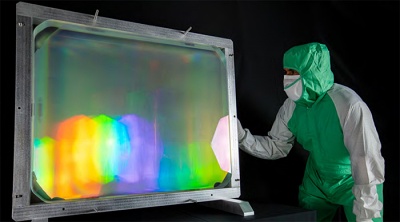 A research collaboration coordinated by Lawrence Livermore National Laboratory (LLNL) has developed new large-scale diffraction gratings that are thought to be capable of delivering ultrashort laser pulses with a power of up to 50 petawatts.

So far the team has produced high-energy pulse compression gratings measuring 85 x 70 cm that will be installed in the L4-ATON laser system at the ELI-Beamlines Facility near Prague in the Czech Republic.

L4-ATON is expected to generate 1.5 kJ, 150 femtosecond pulses - equivalent to 10 petawatts of power - at an unprecedented repetition rate of one shot per minute.

Dielectric gratings
Based on the Nobel-winning chirped-pulse amplification (CPA) technique, laser systems such as L4-ATON must stretch, amplify and compress a high-energy pulse without damaging optical components.

It means that the pulse-compression gratings used must be sufficiently large, efficient and robust to withstand the high photon flux of the laser pulses.

“The 85-by-70-centimeter HELD gratings, configured at a Littrow angle (the angle of maximum grating efficiency) of 37 degrees, allow for a larger beam width [of] 62.5 centimeters,” he said.

“Increasing the beam height to produce a square beam and accounting for the difference in LIDT (laser-induced damage threshold) results in approximately 3.4 times more total energy on the grating compared to the [earlier] high-dispersion, 76.5 degree angle of incidence grating design.

“The HELD grating’s excellent uniformity is due to a design with high efficiency over a large range of groove widths and heights and well-controlled dielectric layer thickness.”

The new gratings are based on multilayer dielectric (MLD) material. They comprise a base substrate upon which layers of dielectric mirrors with varying refractive indices are stacked, topped by a layer of ion-etched, light-sensitive photoresist.

The key advantage of MLD gratings is that they substantially enhance the diffraction efficiency of grating compressors over a broad range of wavelengths, as would be found with an ultrashort pulse.

Unlike the metal used in traditional gratings, dielectric materials are non-conducting and are said to absorb 500 times less energy than previous designs.

While the L4-ATON laser beamline will be able to deliver 10 petawatt pulses with the current technology, the LLNL team suggests that by incorporating larger, meter-scale HELD gratings, future systems could hit 20-50 petawatts - opening up even more opportunities for research in plasma and high-energy-density physics, astrophysics, medical diagnostics, industrial processing and more.