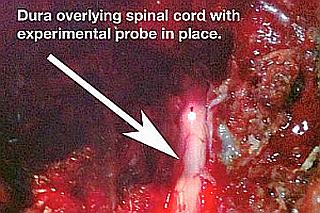 The spinal probe in position

Disruption to the spinal cord's blood flow can have devastating consequences for patients, whether caused by accidental trauma or during elective surgical procedures.

A restriction in blood supply, or ischemia, to the spinal cord deprives the tissues of vital oxygen and nutrients, potentially leading directly to paralysis or various chronic neurological consequences.

But despite its impact and significance, accurate measurements of spinal blood flow have proved troublesome to obtain and analyze, especially during surgery. This has contributed to a lack of detailed knowledge about the mechanisms of damage in the affected areas, and limited success in combating the effects.

A prototype probe developed at Stony Brook Medicine could be a significant step forward, offering a means to directly measure both blood flow and oxygenation close to the site of interest, and potentially providing early indications of ischemia before it takes hold.

"Current techniques to assess ischemia are based upon electrophysiology," said Stony Brook's Thomas Floyd, describing how motor evoked potentials (MEP) recorded during electrical stimulation of the brain's motor cortex are the best available methods to monitor the body's wider motor system during spinal surgery, providing an indication of the integrity of the spinal motor tract.

"These existing methods are indirect, temporally insensitive, non-specific, and cumbersome," he commented. "It's a 50-year-old technology, and it can produce a 40 percent rate of false-positive results. This is highly unsatisfactory."

The fiber-optic device designed at Stony Brook in a project backed by the Craig H Neilsen Foundation offers some significant improvements. Its potential was recognized at this year's SPIE Photonics West event, when it was among the technologies selected as having the highest clinical potential during the Translational Research Symposium.

Diffuse optics
Two established optical techniques come together in the Stony Brook probe: diffuse optical (DOS) and diffuse correlation (DCS) spectroscopies. Optical fibers are used to deliver and collect the light from the spinal cord, allowing both spectroscopy modalities to be operated in parallel.

Stony Brook's implementation uses a continuous-wave 785 nm source in its DCS module, with a pair of photon-counting avalanche photodetectors collecting the returned signal for subsequent computation. The DOS platform switches between three near-IR wavelengths - 686, 785 and 830 nm - with a switching time of 150 milliseconds, and two photomultiplier tubes pick up the modulated light returning from the probe.

The optical probe itself is 3 meters long and less than 1 mm in diameter, employing two source-detector separations at 1 and 2 cm, and was designed to be employed in either epidural or subdural positions - complementary to methods already established in clinical use with proven safety levels.

"Placement of epidural catheters is used thousands of times a day around the world by anesthesiologists for pain control," noted Floyd. "The procedure is not devoid of potential complications, but has a high safety profile and is a technique that people are familiar and comfortable with."

Testing was carried out on animal models - specifically adult Dorset sheep, a known test subject for spinal studies thanks to spines similar to those of humans in terms of spinal cavity depth and width.

Those trials showed that the probe was able to detect and monitor both spinal cord blood flow and oxygenation accurately and rapidly, when conditions designed to elicit ischemia were induced. A comparison with concurrent flow measurements made using microspheres, the gold standard for blood flow testing in the laboratory, showed a close agreement between the established and new techniques.


Future developments at Stony Brook will now focus on improved data processing and display, as steps towards the ultimate goal of a platform suitable for unattended bedside monitoring. Potential design improvements could see a series of sources and detectors arranged longitudinally, allowing the probe to interrogate the spinal cord over a longer distance and map the progress of either spinal injury or ischemia.

A start-up company, NFOSys, has been created to exploit the technology; Floyd indicated that NFOSys already has management candidates and funding lined up, and commercialization of the new platform could move forward relatively quickly.

"Alongside clinical use, we foresee this technology being used in the laboratory to learn more about physiology of the spinal cord and the effects of interventions to restore blood supply and treat paralysis, as there is a limit to what we know right now," he commented. "The tolerance of the spinal cord to a decrease in blood flow is not well understood, so the probe should help further research into this topic. Its underlying technology is well described and the placement of the probe uses a familiar technique, so we believe it will be highly useful."