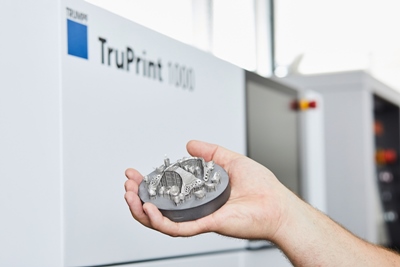 Moscow-based Conmet is currently using a Trumpf “TruPrint 1000” system to make lightweight titanium alloy cages that are inserted between adjacent vertebrae, as a treatment for herniated discs.

And according to an article published by the Ditzingen laser firm’s in-house magazine, Conmet plans to ramp production of the implants by investing in a TruPrint 3000, which has a larger build chamber and is based around a 500 W fiber laser emitting at 1070 nm. That output compares with the TruPrint 1000’s 200 W fiber source.

In a separate article published by the Metal AM web site last December, Conmet said that it was able to produce 60 of the implants each month with the TruPrint 1000, and had been planning a modest increase in output of approximately 10 per cent.

The Moscow firm points out that it is virtually impossible to manufacture the implants - which need to be porous to promote good integration with bone tissue - using conventional methods like metal turning, milling, or casting.

Facial implants
The company also produces dental and facial implants, which are used in patients following invasive surgery to remove cancerous tumors. Conmet has been using the Trumpf additive system for this application since early 2018, taking patient data provided by hospitals to produce personalized implants, in consultation with the surgeons who ultimately carry out the implant procedures.

“Conmet has managed to reduce the cost of manufacturing craniomaxillofacial implants by around 40 per cent,” claims the laser firm.

The Trumpf magazine piece adds that, having used the TruPrint 1000 system to establish the processes needed, Conmet now plans to embark on full-scale production of the patient-specific spinal implants “at the earliest possible stage” with the larger machine.

Earlier this month Trumpf announced that it would be showcasing the titanium implants, as one of a variety of new laser additive applications, at the giant “EMO Hannover” trade show taking place this September.

At the time Thomas Fehn, general manager of Trumpf’s additive manufacturing business unit, said: “Interest in additive manufacturing technologies remains high because the process’s benefits are proving their merits in more and more practical applications. This applies as much to conventional metalworking companies as it does to future products in the aerospace industry.”

Trumpf adds that because it produces its own lasers for the additive manufacturing systems, it is able branch out into new applications rapidly, while continuously improving processes. 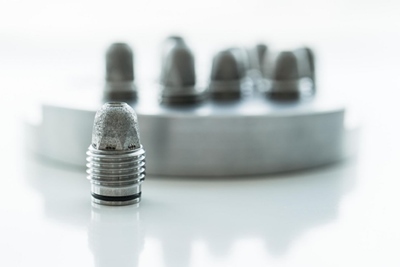 Satellites to sewers
Recent examples of that are said to include printing copper and gold parts using a green laser, with anticipated benefits for the jewelry and electronics sectors.

In the area of satellite communications, Trumpf has been working alongside Tesat-Spacecom, producing a new 3D-printed mounting structure for the forthcoming Heinrich-Hertz satellite mission.

The mount holds strap-on motors that control microwave filters, and in collaboration with Paderborn-based AMendate, Trumpf’s engineering team was able to reduce the weight of the mount from 164 grams to just 75 grams - component weight being a hugely important consideration for satellite launches.

But the technology appears to be just as useful in Earth-bound applications - none more prosaic than the fabrication of cleaning nozzles for sewer systems.

Trumpf explains that these nozzles are mounted on the head of so-called “cleaning bombs” that slide down channels on carriages, spraying high-pressure water jets to dislodge sludge in large sewer lines.

While the nozzles appear simple in design, making them using conventional methods still requires a four-step process. Switching to the 3D-printed approach eliminates the need for milling and gluing, says Trumpf, cutting production time by half.

“For the first time, this will allow up to 10,000 parts to be manufactured per year,” claims the company, adding that there would be side benefits in the form of smoother flowing jets of water, reduced water consumption, and better cleaning performance.