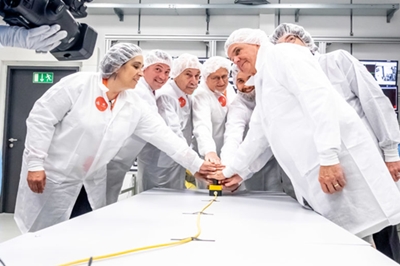 The ‘L3’ beamline at the first Extreme Light Infrastructure (ELI) facility is up and running, and ready to carry out initial experiments.

Conceived and built over the past five years by a team at California’s Lawrence Livermore National Laboratory (LLNL), the High-repetition-rate Advanced Laser Petawatt Laser System (HAPLS) is based around the world’s highest peak power laser diode emitter arrays from Lasertel.

On July 2, local dignitaries officially inaugurated the system at the giant ELI Beamlines facility in Prague, Czech Republic, during a “first shot” ceremony.

“After evaluation by an international peer review group, [L3-HAPLS] has been declared fully integrated and operational,” announced ELI Beamlines. “The system is ready for integration with the experimental systems and first experiments.”

Operational point established
Following a transatlantic delivery from LLNL to the Prague site just over a year ago, HAPLS’ performance has now been ramped to its first operation point – delivering 16 J of energy from a 27 femtosecond pulse at a rate of 3.3 Hz.

That equates to a peak power of approximately 0.5 petawatts, at around a third of the targeted pulse repetition rate for the beamline once fully ramped. “This operational point was established to learn and conduct first experiments at a moderate repetition rate,” announced ELI Beamlines.

Constantin Haefner, who has led the HAPLS delivery team at LLNL over the past five years, said of the milestone: “Developing an unprecedented laser system is an incredible undertaking - as is moving that technology 6000 miles across the Atlantic.

“This level of success was enabled by a smart, talented and capable team of international professionals who worked tirelessly to develop and deliver the next generation of petawatt lasers.”

The system is built around the Lasertel diodes and an ultrafast seed laser provided by the Austrian company Femtolasers – since acquired by Newport Corporation and now part of US-headquartered MKS Instruments.

Femtolasers was revealed as a key partner during the SPIE Photonics West technology exhibition back in 2014, at which point Haefner said that he expected the system to start operating within the Prague facility “sometime in 2018” – a prediction that has now been met. 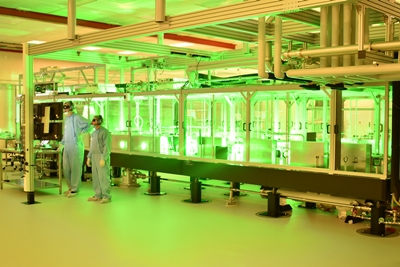 Pulse rate advantage
The ELI Beamlines project manager Roman Hvezda added in a release from LLNL: “In order to fulfill ELI’s mission to enable revolutionary scientific experiments, ELI Beamlines introduced exacting requirements that meant that [LLNL] was the only organization capable of delivering such a complicated and state-of-the-art system.

“After meeting every milestone along the way, this collaboration has successfully delivered L3-HAPLS, which will not only serve as the flagship of ELI Beamlines but also gives us the competitive edge over other facilities in the future. The full integration of this laser system marks the beginning of commissioning the experimental systems to conduct science that can’t be done anywhere else in the world.”

With the L3 beamline capable of generating secondary sources of X-rays, or accelerating charged particles, scientists will be able to use the facility for a variety of research topics, including time-resolved proton and X-ray radiography, laboratory astrophysics, and new approaches to cancer treatment.

While several other petawatt laser sources have been built previously, none has had anywhere near the pulse repetition rate provided by HAPLS – something that will enable researchers using the system to progress their work far more rapidly than is currently possible.

Diplomatic relations
One of the dignitaries in attendance at the “first shot” ceremony, the US ambassador Stephen King, remarked: “As the US celebrates 100 years of diplomatic relations with the Czech Republic this year, this laser system, the result of strong cooperation between ELI Beamlines and LLNL, is just one of many examples of the US’ strong and enduring relationship with the Czech Republic.

“This multi-faceted relationship is based on our rock-solid security cooperation, our growing economic and commercial ties, and our long-standing history of friendship and shared values.”

Pavel Doleček, the Czech Republic’s deputy minister for research and higher education, described the L3-HAPLS laser system as "one of the most significant US-Czech research and technology development cooperation projects [ever] accomplished", adding:

“Research and development is a key area of our bilateral cooperation and this important event only confirms its potential. I am also very glad to meet at ELI Beamlines, which is, thanks to the installation of the laser system L3, the very first research infrastructure of worldwide importance built in Central-Eastern Europe.

“I truly believe that this unique laser system will soon bring excellent results and attract more top researchers from the international science community to the Czech Republic.”

European Union funding
Financed with close to €1 billion via the European Union’s regional development fund to stimulate scientific and economic activity in eastern Europe, ELI comprises three high-power laser facilities – the first of which is the ELI Beamlines facility in Prague.

Also under construction are the ELI Attosecond (ALPS) facility in Hungary, which will deliver unprecedented high-speed science capable of observing electronic motion in chemical reactions, and the ELI Nuclear Physics (ELI-NP) facility in Romania, which will be based around two 10 petawatt laser sources.

Last month France’s Thales Group was awarded a €20 million contract to deliver the ELI-NP beam transportation system. It is expected to be commissioned sometime next year – at which point Thales says it will be the world’s most powerful laser system.