Rapid-fire terawatt laser up and running at ELI-ALPS 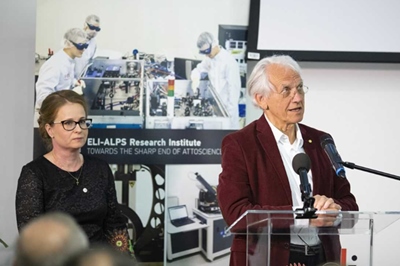 Overseeing “first pulse” of the “Sylos 2A” system, built and installed by the Lithuanian laser companies Ekspla and Light Conversion, Mourou pushed an improvised black button to start the source delivering 32 mJ, 6.6 femtosecond pulses at a rate of 1 kHz.

The laser system is based on optical parametric chirped-pulse amplification (OPCPA), the technique for which inventors Mourou and Donna Strickland won a share of the 2018 physics Nobel.

Unique combinations
The system’s 4.9 terawatt peak power equates to an average of 32 W, and will be used to drive four of the 12 beamlines at ELI-ALPS (ALPS is short for attosecond light pulses source), where users will carry out fundamental research across industrial, biological, and medical applications.

One intriguing possibility is that Sylos could be used, by driving a secondary source, to reduce the radioactivity of spent nuclear fuel, according to the method of laser-related transmutation.

Ekspla’s CEO Kestutis Jasiunas said in a company statement that the collaboration between the team of scientists and engineers at ELI-ALPS and the two Lithuanian firms, whose expertise originated at Vilnius University, had resulted in a unique combination, namely “extreme parameters plus extreme user-friendliness”.

Martynas Barkauskas from partner company Light Conversion added: “Pumped by dedicated all-solid-state short-pulse (picosecond-scale) sources and their (low-order) harmonics, this approach will be competitive with conventional Ti:sapphire laser femtosecond technology in terms of pumping efficiency, and will dramatically outperform previous technologies in terms of average power, contrast, bandwidth, and - as a consequence - degree of control of the generated radiation.”

User facility transition
Recent months have seen significant developments at the ELI-ALPS site in Szeged, as it transitions out of the construction and installation phase to become an operational user facility. Key moves have included the appointment of attosecond pulse and user applications expert Katalin Varjú as science director, and László Jakab as managing director.

Allen Weeks, director general of the ELI Delivery Consortium, said last month that the nuclear transmutation proposal, led by the University of Szeged, was “just the sort of project” that one would expect to see being developed by host countries involved with ELI.

“The scientific potential of the facility should be realised in particular by the ELI host countries,” Weeks announced. “This is the justification for investing in the facility in the first place.”

Meanwhile, negotiations with “non-host” countries regards joining the facility are described as “promising”.