University of Melbourne device could reveal details about neurodegenerative diseases. 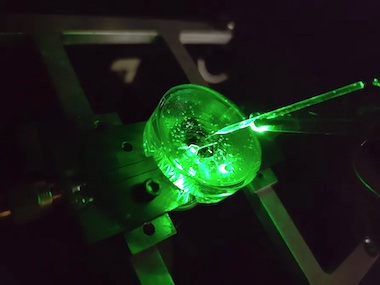 An imaging method employing a diamond-based sensor could allow enhanced mapping of the brain's neural activity.

Developed at the University of Melbourne, the new device is based on voltage imaging, a method employing fluorescent sensors that are sensitive to voltage.

Voltage imaging is attractive because of its ability to directly study the real-time firing of neurons, as opposed to the indirect indication of the same process acquired by calcium imaging. It can potentially offer valuable insights into a large number of neurons simultaneously.

However, the capabilities of existing voltage imaging techniques utilizing microelectrode arrays, scanning probes or optical fluorescence methods are limited by resolution, scan speed and photostability, according to the project's report in Nature Photonics.

Developed by a team from the University of Melbourne and RMIT University, the new device uses a diamond-based sensor that converts voltage signals at its surface directly into optical signals, indicating the presence of electrical activity as it happens.

"We report an optoelectronic voltage imaging system that uses nitrogen-vacancy (NV) defects as charge-sensitive fluorescent reporters, embedded within a transparent semiconducting diamond device," commented the project in its published paper.

NV center defects are known to be optically active sites in diamond, and can be created artificially by bombarding the diamond with a nitrogen ion beam. Research into their practical uses has included Fraunhofer IAF showing how they might be used as a lasing medium if a high enough number of NV centers could be created.

Previous research at Melbourne and RMIT investigated whether NV centers could act as magnetic field sensors, by manipulating the center's natural photoluminescence with outside electromagnetic radiation.

"A previously discovered property of NV defects is that the number of electrons they hold and the resulting fluorescence can be controlled with a voltage," said the team. "Unlike dyes, the voltage response of an NV defect is very fast and stable. Our research aims to overcome the challenge of making this effect sensitive enough to image neuronal activity."

The sensitivity turns out to be controlled by the amount of hydrogen present in the NV center's environment at the diamond's surface. Too much hydrogen means the NVs are so dark that the optical signals cannot be seen; too little and the NVs are so bright that the small signals of interest from neurons are completely washed out.

"Our team developed an electrochemical method for removing hydrogen in a controlled way, achieving voltage sensitivities two orders of magnitude better than what has been previously reported," said the project, which further boosted sensitivity by patterning the diamond’s surface into nanopillars with the NV centers embedded in their tips.

The hope is that this technology is a step towards label-free, large-scale and long-term voltage recording of physical and biological systems with sub-micrometer spatial resolution. No other existing system can simultaneously offer these three qualities, commented the project, so the breakthrough could make a valuable contribution to the work of neuroscientists.