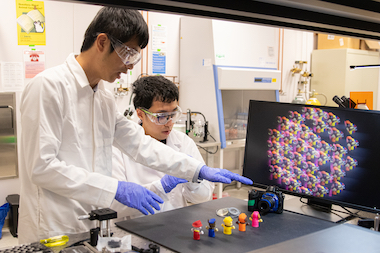 A project at the University of California, Davis (UC Davis) has designed a lensless camera able to capture 3D information about objects in a scene with a single exposure.

As described in Optics Express, the new platform could prove useful for a variety of applications including industrial part inspection, gesture recognition and collecting data for 3D display systems.

The concept behind lensless imaging aims to allow lighter and more compact imaging devices by doing without the glass lens elements typically involved in directing and focusing incoming light, for example by modelling the paths of the photons after their arrival instead.

To date this has usually required extensive calibration of the point spread function and heavy computational resources to reconstruct the object, according to the project team. UC Davis took a different approach, by designing and fabricating a customized optical phase mask made from a microlens array.

The team also developed a deep learning model for depth-resolved photorealistic reconstructions, allowing the camera to effectively learn from existing data how to digitally reconstruct a 3D scene and so produce 3D images in real time.

"We consider our camera lensless because it replaces the bulk lenses used in conventional cameras with a thin, lightweight microlens array made of flexible polymer," said the UC Davis team leader Weijian Yang. "Because each microlens can observe objects from different viewing angles, it can accomplish complex imaging tasks such as acquiring 3D information from objects partially obscured by other objects closer to the camera."

After performing numerical simulations to verify the camera's performance and trials of simple 2D imaging, the team tested the camera's ability to perform 3D imaging of objects at different depths. It found that the resulting 3D reconstruction could be refocused to different depths or distances, and the camera also created a depth map that agreed with the actual object arrangement.

The new architecture performs better than other types of optical modulators used in lensless imaging in terms of 3D resolving power and image resolution, noted the project in its paper. As well as allowing a larger distance to the image sensor than other lensless designs, which boosts the axial resolving power, the UC Davis approach leads to a less multiplexed image and simplified reconstruction process.

The project also confirmed that its device could as intended image objects behind opaque obstacles, as long as some of the microlens units had a perspective on a partially obscured target. This is "to the best of our knowledge, the first demonstration of using a lensless imager to resolve objects behind obstacles," noted the project.

The next steps will be to reduce artifacts in the 3D reconstructions, and improve the algorithms to enhance the quality and speed further. The ultimate goal is to miniaturize the device footprint enough that it could fit into a consumer device, such as a cellphone.

"With the recent development of low-cost, advanced micro-optics manufacturing techniques as well as advancements in machine learning and computational resources, computational imaging will enable many new imaging systems with advanced functionality," commented Yang.