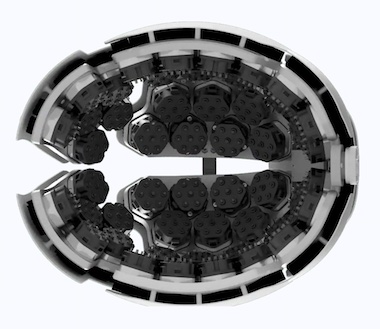 The company has now released new performance data for Kernel Flow, its wearable brain imaging system, in Journal of Biomedical Optics (JBO), data which the company believes confirm the device's potential for broadening the practical applications of brain imaging.

Together Kernel Flux and Kernel Flow "will combine into the richest neural data sets in history collected at a record speed," according to the company.

Functional near-infrared spectroscopy is an attractive route to imaging of neural networks, able to reveal both oxy- and deoxy-hemoglobin concentrations. Recent research into its use has included combining frequency-domain near-IR spectroscopy with phase measurements to enhance the imaging capabilities of the technique; and using time-resolved near-IR alongside diffuse correlation spectroscopy to view infant brain blood flow.

Kernel Flow is also built around time-domain functional near-infrared spectroscopy (TD-fNIRS), a technique whose potential use has previously been held back by issues of cost and complexity, with the existing commercial systems having few channels and slow sampling frequencies, according to Kernel.

The Kernel Flow headset consists of 52 modules arranged in four plates fitting around the wearer's head, with each module comprising three major subassemblies: laser assembly, detector assembly, and optical assembly. Two edge-emitting laser diodes in each module produce 690 and 850 nanometer emissions, and are surrounded by six hexagonally arranged detectors, each 10 millimeters from the source. Light is transmitted from source or to detector locations using spring-loaded light pipes 2 millimeters in diameter.

This architecture was designed to make the device as cost-effective and efficient as possible, according to Kernel, with custom pulse-shaping circuitry ensuring that the pulses are less than 150 picoseconds wide and bespoke detector circuits said to be optimized for performing time-of-flight measurements for diffuse optical tomography.

Your brain on ketamine

Kernel was founded in 2016 by entrepreneur Bryan Johnson, who raised $110 million in support of the company's brain imaging goals using both profits of his online payment business and his own money.

The trials now reported in JBO included using Kernel Flow to record the brain signals of two participants while they performed a finger-tapping task. During the testing session, histograms from more than 2,000 channels were collected from across the brain to measure the changes in the concentrations of oxy- and deoxyhemoglobin.

The results showed that the system could match the achievements of conventional instrumental platforms, and "demonstrated a performance similar to benchtop systems with our miniaturized device, as characterized by standardized tissue and optical phantom protocols for TD-fNIRS and human neuroscience results," said Ryan Field from Kernel.

Future work will involve evaluating the performance of the system with different hair and skin types, but Kernel believes that the current data already demonstrate that its platform could make neuroimaging more accessible across health and science. In 2021 the US FDA approved a clinical trial using the Kernel Flow platform to monitor the effect of ketamine on the brains of patients, one example of the broad application base that the company envisages.

"This is the world's first wearable full-head coverage TD-fNIRS system that maintains or improves on the performance of existing systems and has the potential to achieve its mission of making neuro measurements mainstream," said JBO guest editor Dimitris Gorpas. "I am really looking forward to what the brain has yet to reveal."