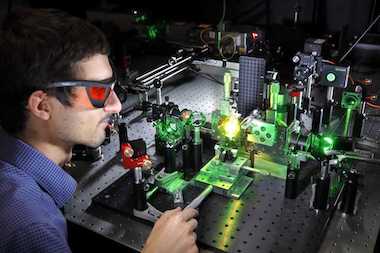 Fraunhofer IAF has achieved a milestone in its development of laser threshold magnetometry (LTM), with the first measurement of magnetic-field-dependent stimulated emission.

The findings, published in Science Advances, demonstrate that the principle behind LTM holds promise for the development of sensitive magnetic field sensors for use in medical care and disease detection.

"Our goal is to develop an extremely sensitive magnetic field sensor that works at room temperature as well as in the presence of background fields and is thus useful for clinical implementations," said Jan Jeske, project manager at Fraunhofer IAF.

The breakthrough comes from the DiLaMag project, set up in 2018 to investigate whether magnetic sensors sensitive enough for biomedical and clinical tasks could be made less expensive and complex than the existing platforms, which often involve extreme cooling of the sensors themselves.

DiLaMag aims to use diamonds containing a high degree of a nitrogen vacancy (NV) centers as a laser medium. NV centers are known to absorb green light and emit red light, with a luminosity affected by the intensity of an exterior magnetic field. Since the centers are so small, this effect can in theory detect magnetic fields with high spatial resolution and sensitivity.

When Jeske and Fraunhofer IAF launched the project, they predicted that LTM may lead to magnetometers with sensitivities two to three orders of magnitude better than existing NV-demonstrations, and comparable to state-of-the-art SQUID (superconducting quantum interference device) magnetometers. The new results demonstrate magnetic-field-dependent stimulated emission for what is said to be the first time in the world, according to Fraunhofer IAF.

Using NV diamond as a laser medium, the Fraunhofer project achieved a 64 percent amplification of the signal power by stimulated emission. The magnetic-field-dependent emission showed a contrast of 33 percent and a maximum output power in the mW regime, a "new contrast record in magnetometry with NV ensembles" according to the project.

The project also recorded that it saw a very relevant and previously unknown physical process in NV diamond, the absorption of red light induced by green laser irradiation.

"Stimulated emission is responsible for this, and we were able to show that this record would not have been possible with spontaneous emission," said Jeske. "Thus, we have experimentally demonstrated the theoretical principle of laser threshold magnetometry for the first time."

Creating diamond with a suitably high density of NV centers and desired optical properties is itself a challenge. DiLaMag has investigated the production of diamond by chemical vapor deposition and post-processing by electron irradiation and temperature treatment, to increase NV density.

Fraunhofer's new results confirm that techniques for producing CVD diamond with a high density of NV centers and in good quality are available, a prerequisite for the development of diamond-based laser threshold magnetometry for the measurement of extremely small magnetic fields.

"The coherent readout of NV centers pave the way for novel cavity and laser applications of quantum defects and diamond NV magnetic field sensors with substantially improved sensitivity for the health, research, and mining sectors," commented the project in its paper.