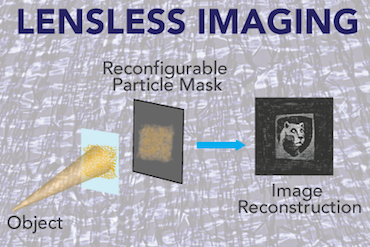 Lensless imaging, in which the paths photons take returning to a detector from an object are modeled after arrival rather than redirected by a lens en route, can in theory lead to smaller and lighter imaging platforms.

Various strategies, including time-resolved sensing and analysis of diffraction patterns have been investigated as ways to recreate an image in this way without need of a traditional lens.

One promising approach is to employ optical masks, replacing the lens with a phase or amplitude mask placed a short distance in front of the sensor. The mask maps each point in the object scene onto several sensor pixels, indirectly encoding image information which is then reconstructed via an algorithm.

A project at Pennsylvania State University has now demonstrated how dynamically reconfigurable particle-based masks can accelerate this procedure, helping to counter its complexity and enabling multishot image reconstruction. The work was reported in ACS Nano.

"We are not the only group to do lens-free imaging," commented Jennifer Miller of Penn State. "What is different about our work is that typically you would need to make multiple masks and physically move them around, to get multiple images. This becomes bulky and expensive and negates some of the simplicity that is the advantage of lens-free imaging."

The team's new approach was to design scattering masks based on gold nanowires chained between planar electrodes, placed near to the object that will be imaged. The mask scatters the light reflected off the object, and an image sensor then collects the scattered light.

An electric current rearranges the exact configuration of the mask's nanowires, effectively generating a new mask with every iteration, and the system records each new image. The multiple light captures are then computationally reconstructed into the original object image, resulting in improved resolution and quality over traditional lensless methods.

"Disordered particle populations are tuned by rational application of electric fields, without requiring bulky or expensive components," noted the project in its published paper.

"Traditional masks are passive," commented Penn State's Cheng-Yu Wang. "We can add functionalization to our microwire, like polarization, selectivity and plasmonic effects, that make our imaging system more powerful."

"By leveraging the submicrometer thickness of particles and the resultant large optical memory effect, an angular field of view of +/- 45 degrees is demonstrated," commented the team in its paper. "The reconfigurable nature of the particle arrays enables multishot reconstruction, which results in enhanced image quality and improved signal-to-noise ratios by up to 10-fold. "

According to Penn State, the results suggest that reconfigurable particle masks could be a broadly applicable means of achieving dynamically tunable light scattering with potential applications in lensless microscopy or high-resolution imaging.

This should make it possible to combine a wide field of view with high magnification, potentially allowing lower-cost bioimaging and faster diagnosis of disease in developing countries where high-end microscopes are not available.