Combination of modalities could suit translation into clinical practice. 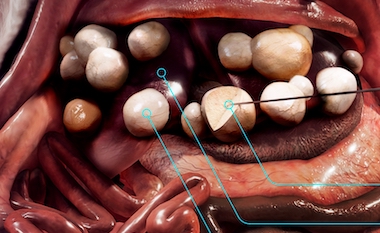 A project at Russia's Orel State University has developed an optical technique for identification of liver carcinomas that should be suitable for use in needle biopsies.

The approach should be of value as part of an optical biopsy approach, in which the extent of cancerous tissues is determined in real time and in situ without the need to remove and analyze sections of tissue. Such optical biopsy platforms have been the subject of substantial research in recent years, with breakthroughs made in their use for identifying lung cancers and skin melanomas.

"The instrument is designed to be compatible with the needles currently used for liver biopsies," said Evgenii Zherebtsov from Orel State University. "It could thus one day help surgeons more precisely navigate the biopsy instrument to decrease the number of errors in taking tissue samples that are used for diagnosis."

Diffuse reflectance spectroscopy collects diffuse and scattered light returning from a sample, an approach known to be potentially valuable in cancer diagnosis thanks to its ability to assess hemoglobin levels and blood oxygenation. Fluorescence lifetime analysis exposes tissues to a wavelength of light that induces fluorescence and then measures how long that fluorescence takes to fade, a property dependent on which molecules are present.

"Although our team as well as others have previously used fluorescence intensity for tissue assessment, studies performed in other parts of the body have shown that fluorescence lifetime is less dependent on experimental conditions," said researcher Elena Potapova. "Fluorescence lifetime measurements remain more consistent in the presence of blood, when there is non-uniform illumination, or if the contact between the probe and tissue changes due to movement."

The project designed a platform incorporating the two optical technologies into the channels of an optical needle probe 1 millimeter in diameter, compatible with the standard equipment for a clinical puncture biopsy procedure. In trials, the researchers first measured known solutions of molecules that play key roles in metabolism before moving on to experiments in a mouse model with liver cancer. Preliminary measurements were then made in patients with suspected liver cancer to the test the system on humans.

Results showed that "characteristic changes in registered fluorescent parameters can be used to reliably distinguish between the hepatocellular carcinoma tissue, the liver tissue in the control, and the metabolically changed liver tissues of animals with the developed tumour," according to the project's published paper.

"It was important to us to compile a comprehensive picture of the observed changes for cancer in both the mouse model and the clinical setting,” said Zherebtsov. “Our studies in patients who had the same type of tumor as the mice showed that our technique can provide stable, reproducible results that can be used to detect cancer."

The next steps will involve measuring fluorescence lifetime parameters in patients with different types of tumors at different stages, to generate real-time diagnostic classifiers. This will also make it possible to apply machine learning methods that could help surgeons make clinical decisions during a biopsy procedure.

"Optical biopsy methods like the one we developed make it possible to differentiate healthy and tumor tissues with a high degree of accuracy," said Elena Potapova. "Although our system was specifically designed for use in abdominal surgery, our results show that similar technologies could be useful for other medical applications."