Johns Hopkins trial on pigs points towards use of photoacoustic assistance in surgery. 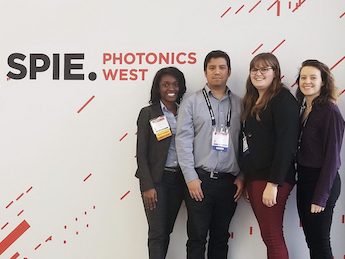 Muyinatu Bell and the PULSE team

A project at Johns Hopkins University has used photoacoustic imaging paired with robotic visual servoing for the visualization and guidance of a cardiac catheter during surgery, a step towards using the same combination more commonly in medical procedures.

The trial, reported in IEEE Transactions on Medical Imaging, involved cardiac procedures carried out on pigs, but the findings may potentially be applied to any procedure that uses a catheter. These could include in vitro fertilization, or surgeries using the da Vinci robot system, where clinicians need a clearer view of large vessels.

"This is the first time anyone has shown that photoacoustic imaging can be performed in a live animal heart with anatomy and size similar to that of humans," said Muyinatu Bell of the Photoacoustic & Ultrasonic Systems Engineering (PULSE) Lab at Johns Hopkins.

Photoacoustics employs a non-ionizing laser pulse to briefly heat up an absorbing target for a short instant of time before allowing it to cool, causing an expansion that in turn creates an ultrasound signal.

Particularly significant as a means to image hemoglobin, and so accurately assess blood supply or tumor margins, it could also provide depth information and enhanced visualization of catheter tip locations within blood vessels or the beating heart, which was the goal of the Johns Hopkins team.

Past use of ultrasound imaging alone to assist catheter tracking during surgery has tended to generate poor image quality because of general acoustic clutter, so photoacoustics could offer a valuable alternative.

"In addition to the known challenges of image quality with using ultrasound alone to guide catheter placement, another challenge is the expectation that the probe will be held by hand," noted the team in its published paper. "We propose to overcome both of these challenges with a robotic photoacoustic system that holds the probe and autonomously centers it on photoacoustic signals from the catheter tip."

For this study, Bell’s team placed an optical fiber inside a catheter’s hollow core, with one end of the fiber connected to a laser to transmit 750-nanometer light, so that the optical fiber's visualization coincided with the visualization of the catheter tip. Conventional ultrasound images were taken at the same time for comparison with the location data delivered by the photoacoustic signal.

The group then performed cardiac catherization on two pigs under anesthesia using a Sawyer robotic system from Rethink Robotics. Fluoroscopy was employed to initially map the catheter's path on its way to the heart.

Guiding cardiologists towards the heart

Bell’s team successfully used robotic technology to hold the ultrasound probe and maintain constant visualization of the photoacoustic signal, receiving image feedback every few millimeters. Positional errors for the catheter tip measured by photoacoustics, compared with conventional fluoroscopy and electromagnetic mapping techniques, were found to be 0.25 to 2.28 mm in 1D measurements and 1.24 to 1.54 mm in 3D measurements.

Lasered regions of cardiac tissue were resected for histopathological analysis, which revealed no laser-related tissue damage despite the delivery of 2.98 mJ per laser pulse at the fiber tip, according to the group's paper.

While more experiments are now needed to determine whether the robotic photoacoustic imaging system can be miniaturized and used to navigate more complicated pathways, as well as perform clinical trials to definitively prove safety, these findings are a promising step forward.

"We envision that ultimately this technology will be a complete system that serves the four-fold purpose of guiding cardiologists towards the heart, determining their precise locations within the body, confirming contact of catheter tips with heart tissue and concluding whether damaged hearts have been repaired during cardiac radiofrequency ablation procedures," said Bell.