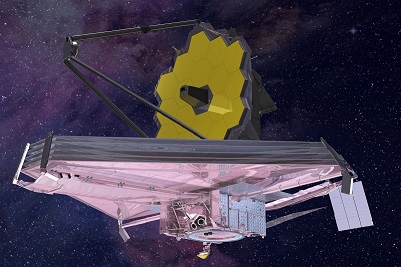 JWST — the most complex and powerful telescope ever built.

The James Webb Space Telescope (JWST) — a joint development by NASA, European Space Agency, and Canadian Space Agency — is the most complex and powerful telescope ever built. By happy coincidence, its first amazing images were rapturously received around the world just a few days before SPIE Astronomical Telescopes + Instrumentation opened this week in Montreal.

JWST’s history, which includes a “near-death experience” (meaning cancellation) at the hands of a U.S. congressional committee in 2011 when there was an effort to kill it off, raises many important issues, as well as lessons for the future of space astronomy, according to Monday’s plenary speaker Prof. Robert W. Smith, a history professor at the University of Alberta, who has a special interest in all matters space and astronomical.

Prof. Smith has written extensively on the history of space astronomy, including his award-winning book, The Space Telescope: A Study of NASA, Science, Technology, and Politics. He was the winner of the American Astronomical Society’s Doggett Prize for Historical Astronomy in 2020, and since 2002 has acted as the on-scene historian to the James Webb Space Telescope initiative.

‘A pity it was cancelled’

He startled the packed auditorium at the Palais des Congres, with his opening line: “What a pity it was that the JWST was cancelled in 2011,” referencing that near miss with the U.S. congressional committee. But he went on, “Fortunately, that never happened although it nearly could have been cancelled, on more than one occasion, in the decades leading up to the delayed eventual launch on Christmas Day, 2021.”

It was a series of some of the “key moments” during more than a century that led towards the development of the JWST and its launch that were the basis of Prof. Smith’s plenary presentation:

Prof Smith told the audience, “Around the same time as that, financiers and amateur astronomers Andrew Carnegie and John Hooker provided funding for the 100-inch Mount Wilson telescope. In 1912, Henrietta Leavitt at Harvard characterized the period-luminosity relation of Cepheid variables.”

Leavitt’s discovery and the Mount Wilson telescope enabled astronomer Edwin Hubble to prove in 1923 that the universe contains a myriad of galaxies and that our own galaxy is not the only one in space. 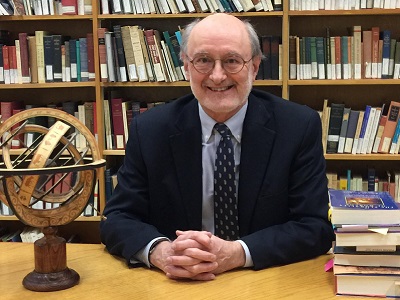 Moment 2 In 1957 on the 4th of October, Sputnik 1 was launched, triggering the “space race” between the then Soviet Union and the West, which led to a significant transformation of space research. This resulted in the development and launch in 1970 of the panchromatic space astronomy satellite Uhuru, which performed the first comprehensive survey of the entire sky for X-ray sources.

Then in 1990, the Space Shuttle Discovery was launched and deployed the Hubble Space Telescope the following day into orbit; in June, 1990, spherical aberrations were discovered in Hubble's primary mirror.

Moment 4 Prof. Smith pointed out, “With the launch of the Hubble considered to be a failure with its focus problems, there would be no approval for the Next Generation Space Telescope until the Hubble was fixed, but Hubble's subsequent correction led to great images like Pillars of Creation and of comet Shoemaker Levy 9 striking Jupiter and public rehabilitation.”

Moment 5 So in 1991 there was serious consideration of a successor to Hubble. The Bahcall Decadal Committee in 1991 anticipated a “decade of infrared astronomy”, noted Prof. Smith. “Then there was the publication of The State of Infrared Astronomy by Malcolm Longair in May 1991; Tim Harwarden progressed the idea at the University of Edinburgh conference in 1991. Various solutions were proposed such as Poirot and Edison; these were not developed but built up the potential,” he said.

Moment 7 In an American Astronomical Society speech by NASA Administrator Dan Goldin in 1996, he said the next big steps would be in the infrared range. Prof. Smith noted that Goldin said ‘we have to move beyond the visible if we are going to open up a whole universe to our eyes. We need to think big – not just a four-meter telescope; why not go up to six or seven meters?’

Presenting some hand-drawn sketches with a familiar “JWST-like” appearance from October 1995, Prof. Smith said a contract was then drawn up and in 1996 designs began to be established for the “Next Generation Space Telescope”, which resemble what would become the JWST – 25 years later.

He commented, “In 1997, the NGST was framed as the anti-Hubble because the Hubble came to be regarded as a too-expensive project. The FBC missions – standing for Faster Better Cheaper – commenced and 16 were launched of which six failed, so that meant the end of that approach.” 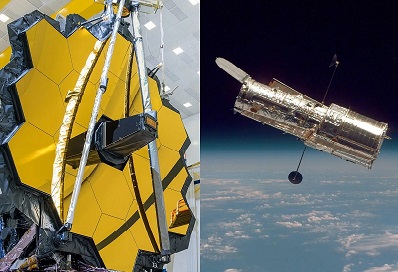 Now and then: the JWST and the Hubble.

Moment 8 The JWST Project went forward, the Prime Contractor selected (TRW, which was soon taken over by Northrop Grumman), and a Science Working Group was set up and appointed by NASA Headquarters in the early 2000s to provide guidance on the science goals and capabilities of JWST.

Moment 9 Prof. Smith continued, “The JWST had been zeroed out of the US Government budget in July, 2011, in a battle between senators Frank Wolf and Barbara Mikulski (for). Mikulski was a key political supporter of JWST.”

Mikulski was a successful negotiator and played a key role in beating off political attacks. The NASA-funded Space Telescope Science Institute (STScI) in Baltimore named one of the world's largest astronomy databases after her, because she was a long time champion of both the Hubble and JWST.

The JWST was originally supposed to launch in 2009 for a total cost of between $1 billion and $3.5 billion, but after a series of delays the cost ballooned to $11 billion. Prof. Smith has followed the project for 22 years, from inception to the transmission of its first photos from space.

Two weeks ago, scientists in NASA’s control room were relieved when the JWST unfolded its 18-piece mirror without a hitch. “There are people on this project who have been working on it since the 1990s. But I will be surprised if we hear about anything like what happened with the Hubble,” Prof. Smith optimistically concluded. “On the evidence to date, JWST is a technical and scientific triumph.”