Developer of photonic crystal fiber and supercontinuum lasers set to become part of the Japanese company next year. 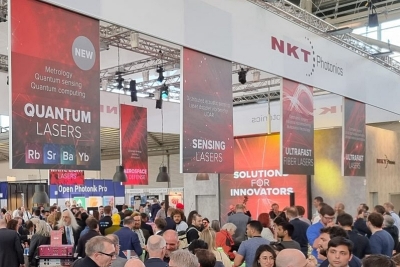 The two firms have agreed a cash deal valuing NKT Photonics at €205 million, with completion expected in March 2023.

Hamamatsu said that the acquisition would help it to expand its laser applications business in the future, pointing out that supercontinuum white light lasers have become important in both the microscopy sector and for semiconductor device inspection.

Meanwhile NKT’s high-stability single-frequency fiber sources are being deployed in emerging quantum technology applications, where they are used to form cold traps of ions and atoms for sensing and computing applications.

“As we expand our laser application business in the future, NKT Photonics' product line-up will be important,” announced Hamamatsu.

“In particular, fiber lasers, which can be made compact and lightweight, are the most attractive laser technologies, and we look forward to further expansion in the field of applications.”

Purchasing power
NKT’s CEO Basil Garabet told optics.org that the switch in ownership would yield several benefits for NKT Photonics, as it joined a company that “lives and breathes photonics”.

“We will benefit from complementary technology such as detectors and diodes, which will enable us to make new products, and from increased purchasing power,” added Garabet, who will remain CEO of the firm after the acquisition is completed.

“On the commercial side, we get access to a big sales force that will help us reach new markets and further develop existing ones.

“As an example, Hamamatsu Photonics sells a lot of components to the semiconductor industry. This market has grown significantly for us in the last couple of years, and together, we will be able to serve the customers in that market even better.”

Garabet also points out that Hamamatsu has a long-term focus on growth, and a track record of investment to back that up. “Consequently we expect NKT Photonics to flourish and grow even faster under Hamamatsu ownership,” he said.

Hamamatsu’s CEO Akira Hiruma added: “The integration of our two companies allows us to enlarge our portfolio of solutions for use in, for example, the industrial, scientific, and healthcare sector[s].

“NKT Photonics will constitute our dedicated fiber and laser division, an area where we see significant growth potential.”

Branding and sites unchanged
Although the roots of NKT go back more than a century, the modern incarnation of NKT Photonics took shape in the early 2000s, when holding company NKT A/S - whose core business is in power cables - established a number of photonics startups.

Those included Crystal Fibre, the first company to mass-produce photonic crystal fiber (PCF), and Ionas, which specialized in single-frequency sources.

Garabet said that the sale of NKT Photonics to Hamamatsu marked the final step in a process allowing NKT A/S to fully focus on its core business.

Assuming that regulatory approvals are granted for the deal, NKT Photonics will become a subsidiary of the Hamamatsu Photonics group with responsibility for fiber and laser development and manufacturing.

The Danish firm points out that its product portfolio will remain unchanged, with its name and branding retained. Garabet confirmed that there were no plans to make changes to its global sites, and that all of NKT Photonics’ 400-strong workforce were expected to transfer to Hamamatsu.

Financial information released by the Japanese firm showed that NKT Photonics posted an operating income of €7.1 million on sales of just over €80 million in fiscal year 2021. That compares with Hamamatsu’s current annual turnover of around €1.2 billion.