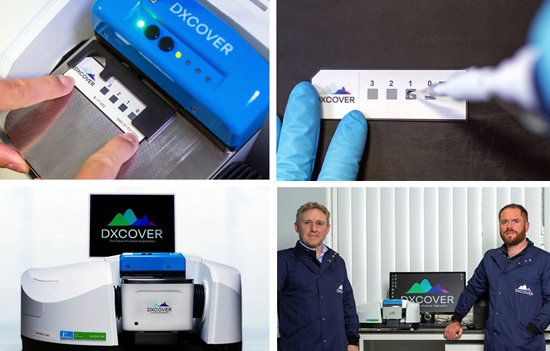 The work is described in the journal Cancers.

Pancreatic cancer is the seventh leading cause of cancer death and worldwide claims more than 440,000 lives per year. It is one of the hardest diseases to detect due to the lack of early symptomatic evidence and fast, simple, and non-invasive diagnostic tests.

The carbohydrate antigen (CA) 19-9 test is the blood test used for pancreatic cancer’s detection, but its levels can be raised in symptomatic patients with other non-malignant diseases, or with other tumors in the surrounding area.

Machine learning algorithms were applied, achieving results of 92% sensitivity and 88% specificity when discriminating between cancers (n = 100) and asymptomatic (healthy) controls (n = 100). An area under the curve (AUC) of 0.95 was obtained through receiver operating characteristic (ROC) analysis. In addition, the test identified cancerous patients among a challenging symptomatic cohort to an AUC of 0.83.

Dr. Matthew Baker, CTO and co-founder of Dxcover, commented, “To our knowledge, this is the largest and most promising proof-of-concept study to date for clinical use of ATR-FTIR spectroscopy in the detection of early and advanced stages of pancreatic cancer.

“The use of our technology can save over $12 million in health care resources per 5000 cancers detected as well rapidly speed up the process for patients to get the required treatment sooner.”

Dxcover has pioneered the early detection and identification of cancer employing infrared spectroscopy of circulating pan-omic biomarkers. The company has generated compelling clinical data with high accuracy detection of Stage I and Stage II cancers. Dxcover says it is establishing operations in the USA.