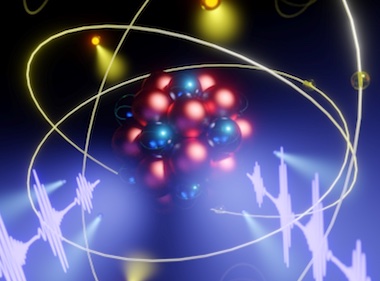 Using such short pulses in a working spectroscopy platform allows the study of complex optical processes, and the project employed it to study non-linear multi-photon ionization of atoms.

The results, published in Optica, "provide insights into one of the most fundamental processes in non-linear optics," according to the Max Born Institute.

Pump-probe spectroscopy using longer femtosecond laser pulses has become established for the study of fast processes. If the dissociation of a molecule is initiated by a femtosecond pump pulse, it can be observed in real time using a time-delayed femtosecond probe pulse, capturing the evolving state of the molecule.

This technique's impact was recognized by the award of the 1999 Nobel Prize in Chemistry to Ahmed Zewail.

To date there has been limited direct experimental insight into multi-photon ionization sequences, and consequently limited understanding of the underlying physics. Using extreme-ultraviolet (XUV) photons should allow better control over the multi-electron dynamics, but the experimental details of XUV attosecond-pump attosecond-probe spectroscopy have proven challenging. Most practical approaches have used only one attosecond pulse, pump or probe, with a femtosecond pulse employed for the other step.

"Multi-electron dynamics in atoms and molecules very often occur on sub- to few-femtosecond time scales," noted the project in its published paper. "The available intensities of XUV attosecond pulses have previously allowed the time-resolved investigation of two-photon, two-electron interactions. Here we study double and triple ionization of argon atoms involving the absorption of up to five XUV photons."

Generating the intense attosecond pulses required involves the use of large and powerful laser systems, a topic where the project partners each have expertise.

The ELI-ALPS (Extreme Light Infrastructure Attosecond Light Pulse Source) research center is currently developing a €6 million laser intended to deliver more than 15 terwatts peak power at a 1 kilohertz repetition rate and less than 8 femtosecond pulse duration. When announced in December 2020, the laser's intended applications were said to include the generation of isolated attosecond pulses for metrology.

In the new study two attosecond pulse trains (APTs) interacted with an argon atom, with the absorption of four photons leading to the removal of three electrons from the atom. According to the project, there are many possible ways in which this multi-photon absorption may take place, and finding out in detail how the electrons were removed from the atom involves varying the time delay between the two attosecond pulses and observing how many ions were generated.

Results showed that multi-photon absorption occurred in three steps. In each of the first two steps a single photon was absorbed, and in the third step two photons were absorbed at the same time. These results were confirmed by computer simulations and demonstrate that the application of intense APTs enables a better understanding of complex multi-photon ionization pathways.

"The developed experimental technique can be used in the future to study complex processes not only in atoms, but also in molecules, solids and nanostructures," commented the project, which hopes to answer further questions about how several electrons interact with each other. "This could help to understand the most fundamental processes on the shortest timescales."