Nobel-winning spectroscopist and much-decorated scholar dies at the age of 70. 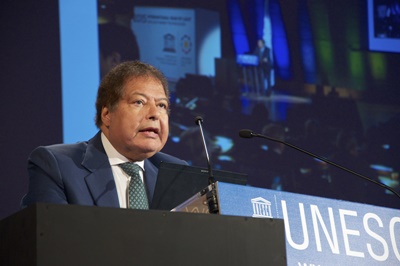 Ahmed Zewail at the International Year of Light launch

Ahmed Zewail, the Egypt-born physical chemist who won the Nobel prize for chemistry in 1999 for his application of femtosecond lasers to revolutionize the study of chemical reactions, has died.

Prior to that, Zewail had studied at Alexandria University in Egypt. He became the first Arab to win a Nobel prize in a scientific discipline.

At Caltech, Zewail’s most recent positions included the Linus Pauling Professor of Chemistry, and director of the Physical Biology Center for Ultrafast Science and Technology.

Caltech president Thomas F. Rosenbaum said in an announcement on the institution’s web site: “Ahmed was the quintessential scholar and global citizen. He spent a lifetime developing instruments that interrogate nature in fundamentally new ways, and defining new directions that cut across the physical and biological sciences.

“Ahmed's fervor for discovery never abated and he serves as an inspiration to colleagues and generations of students. The Caltech community deeply mourns his loss.”

Last night we lost Nobel laureate Ahmed Zewail. His legacy endures - a pioneer of science & 1 of the great Egyptians pic.twitter.com/e8XyepasLw

Year of Light role
The much-decorated scientist received more than 50 honorary degrees and 100 international prizes and awards, among them the Order of the Légion d’Honneur from the president of France, the Albert Einstein World Award, the Benjamin Franklin Medal, the Leonardo da Vinci Award, the Robert A. Welch Award, the Wolf Prize, the King Faisal Prize, the Othmer Gold Medal, and the Priestley Gold Medal.

Former Egyptian president Mubarak also awarded Zewail the Order of the Grand Collar of the Nile, the country’s highest state honor, while Barack Obama appointed him to his Council of Advisors on Science and Technology in 2009.

After the Egyptian revolution of 2011, Zewail became the first chairman of the board of trustees overseeing the Zewail City of Science and Technology named in his honor, while he was invited by United Nations secretary general Ban Ki-moon to join the organization’s scientific advisory board.

Early in 2015, Zewail shared a platform with Ban Ki-moon at the official opening of the UN-sanctioned International Year of Light in Paris. During his talk, the Nobel laureate acknowledged and deplored the Charlie Hebdo attacks that had taken place in the city a matter of days earlier, before pointing out that the study of light was something that all religions and cultures had in common:

“Many of the ancient civilizations, whether Chinese, Buddhist, Hindu, Jewish, Muslim, Christian have from early days worked to gain understanding of our relationship with light,” he said. “Early Egyptians Akhenaten and Nefertiti were some of the first worshippers of the sun, who recognized the importance of our fundamental power source.”

Zewail City of Science and Technology eulogy:
A eulogy posted on the web site of Zewail's eponymous City of Science and Technology stated: "It is with utmost sadness that we bid farewell to our leader, founder and the source of inspiration. Dr. Zewail's dedication to Egypt's National Project made our dreams and work possible. Dr. Zewail was a pillar of hope and a beacon of optimism not only for us but for our beloved country and the world as well."

It continued: "Words undoubtedly fail to capture the gravity of the situation. However, it is our collective duty now to fulfill the mission that we are entrusted with. The work in Zewail City, Egypt's National Project, will move forward despite our irrevocable immense loss."