Spacecraft is scheduled to drop spectrometers into the planet's atmosphere in 2031. 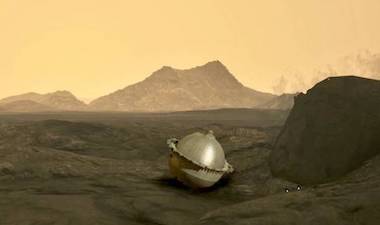 NASA has given new details about the instrumentation scheduled to be aboard the DAVINCI mission to Venus when it launches in 2029.

DAVINCI, or Deep Atmosphere Venus Investigation of Noble gases Chemistry and Imaging, will be the first mission to Venus to incorporate both flybys and an instrumented probe dropped into the planet's atmosphere, an event currently scheduled to take place in 2031.

Instruments on the probe will deliver definitive information about the chemical and isotopic composition of the Venus atmosphere and near-IR descent imaging of the surface, to complement remote flyby observations.

"This ensemble of chemistry, environmental, and descent imaging data will paint a picture of the layered Venus atmosphere and how it interacts with the surface in the mountains of Alpha Regio, which is twice the size of Texas," said Jim Garvin, DAVINCI principal investigator from NASA's Goddard Space Flight Center.

"These measurements will allow us to evaluate historical aspects of the atmosphere as well as detect special rock types at the surface such as granites, while also looking for tell-tale landscape features that could tell us about erosion or other formational processes."

DAVINCI, the first US-led mission to the atmosphere of Venus in more than 40 years, incorporates several advanced photonics instruments in its science package. The atmosphere probe, or descent sphere (DS), includes the Venus Tunable Laser Spectrometer (VTLS), an instrument that draws flight heritage from the tunable laser spectrometer carried by the Mars Science Laboratory.

The sphere will also carry the Venus Descent Imager (VenDI), a platform equipped with a large-pixel CCD detector for maximal signal-to-noise imaging and which also draws upon previous technology carried to Mars by the Curiosity mission. The DS will gather all its information during the descent, followed by a potential operational lifetime of around 17 minutes on the surface.

The full set of DAVINCI instruments is intended to combine a chemical laboratory capable of revealing atmospheric chemistry with a descent imager surpassing previous similar instruments deployed on Mars, while Venus flyby imaging and communications will connect remote sensing with in situ exploration.

"No previous mission within the Venus atmosphere has measured the chemistry or environments at the detail that DAVINCI’s probe can do," said Garvin. “Furthermore, no previous Venus mission has descended over the tesserae highlands of Venus, and none have conducted descent imaging of the Venus surface. DAVINCI will build on what the Huygens probe did at Titan and improve on what previous in situ Venus missions have done, but with 21st century capabilities and sensors."