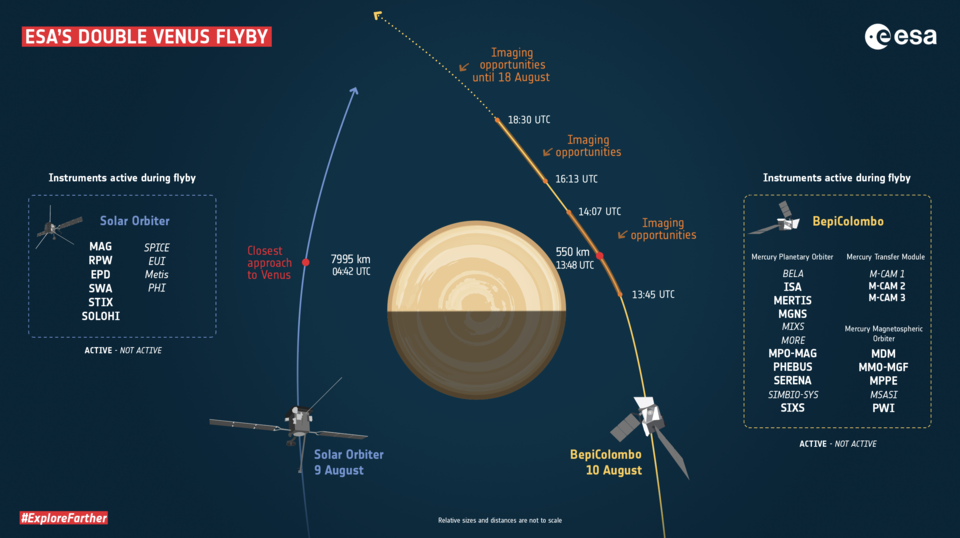 European Space Agency spacecraft, sent in partnerships with NASA and JAXA to the center of the Solar System, will next week capture different views of Venus as they purposefully pass close to the second planet, en route to their respective final objectives. Their primary missions are, respectively, to investigate Mercury and the Sun from new vantage points.

The two spacecraft need the gravitational swingby to help them lose a little orbital energy in order to reach their destinations towards the center of the Solar System. The double flyby offers an unprecedented opportunity to study the Venus environment from different locations at same time and, moreover, in locations that are not typically visited by a dedicated planetary orbiter.

Solar Orbiter, a partnership between ESA and NASA, will fly by Venus on 9 August with a closest approach of 7995 km at 04:42 UTC. Throughout its mission it makes repeated gravity assist flybys of Venus to get closer to the Sun, and to change its orbital inclination, boosting it out of the ecliptic plane, to get the best – and first – views of the Sun’s poles.

BepiColombo, a partnership between ESA and JAXA, will fly by Venus at 13:48 UTC on 10 August at an altitude of just 550 km. BepiColombo is on its way to the mysterious innermost planet of the solar system, Mercury. This probe needs flybys of Earth, Venus and Mercury itself, together with the spacecraft’s solar electric propulsion system, to help steer into Mercury orbit against the immense gravitational pull of the Sun. 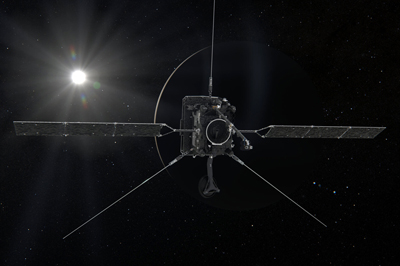 Solar Orbiter has been acquiring data since its launch in February 2020.

It will not be possible to take high-resolution imagery of Venus with the science cameras onboard either mission – Solar Orbiter must remain facing the Sun, and the main camera onboard BepiColombo is shielded by the transfer module that will deliver the two planetary orbiters to Mercury.

However, two of BepiColombo’s three monitoring cameras will be taking photos around the time of close approach and in the days after as the planet fades from view.

The cameras will provide black-and-white snapshots in 1024 x 1024 pixel resolution, and are positioned on the Mercury Transfer Module such that they also capture the spacecraft’s solar arrays and antennas.

During the closest approach Venus will fill the entire field of view, but as the spacecraft changes its orientation the planet will be seen passing behind the spacecraft structural elements.

The images will be downloaded in batches, one by one, with the first image expected to be available in the evening of 10 August, and the majority on 11 August. Furthermore, there may be an opportunity for Solar Orbiter’s SoloHI imager to observe the nightside of Venus in the week before closest approach.

SoloHI usually takes images of the solar wind – the stream of charged particles constantly released from the Sun – by capturing the light scattered by electrons in the wind. 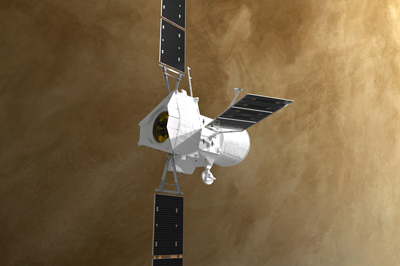 BepiColombo will collect data on magnetic and plasma environments of Venus.

Solar Orbiter has been acquiring data near-constantly since launch in February 2020 with its four in situ instruments that measure the environment around the spacecraft itself. Both Solar Orbiter and BepiColombo’s Mercury Planetary Orbiter and Mercury Magnetospheric Orbiter will collect data on the magnetic and plasma environment of Venus from different locations.

At the same time, JAXA’s Akatsuki spacecraft is in orbit around Venus, creating a unique constellation of datapoints. It will take many months to collate the coordinated flyby measurements and analyse them in a meaningful way. The data collected during the flybys will also provide useful inputs to ESA’s future Venus orbiter, EnVision, which was selected earlier this year and will launch to Venus in the 2030s.

Solar Orbiter and BepiColombo both have one more flyby this year. During the night of 1-2 October, BepiColombo will see its destination for the first time, making its first of six flybys of Mercury – with this one from just 200 km distance.

The two planetary orbiters will be delivered into Mercury orbit in late 2025, tasked with studying all aspects of this mysterious inner planet from its core to surface processes, magnetic field, and exosphere, to better understand the origin and evolution of a planet close to its parent star.

On 27 November, Solar Orbiter will make a final flyby of Earth at 460 km, kicking off the start of its main mission. It will continue to make regular flybys of Venus to progressively increase its orbit inclination to best observe the Sun’s uncharted polar regions, which is key to understanding the Sun’s 11 year activity cycle.