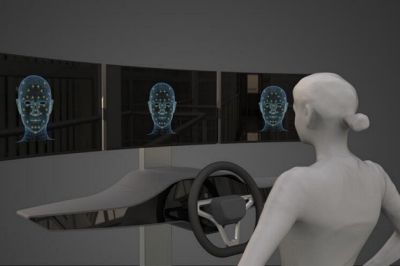 The company says that the setup will support emerging vehicle features like augmented reality (AR) head-up displays and facial security authentication, as well as spotting when drivers become drowsy and warning them.

Depth map
Described as a simple and low-cost upgrade from existing near infrared-based driver monitoring hardware, requiring only the addition of a dot pattern projector to enable depth sensing, ICARUS is based on structured light sensing.

“It uses an ams Osram depth-extraction algorithm which offers scope for even higher performance in future for customers which support custom product development,” claims the firm.

ICARUS works by generating a depth map of the driver’s face to determine the precise position of their eyes and head, with a claimed depth accuracy better than ±0.5% at 45-70 cm.

The company explains that high-value driver monitoring functions can be based on this three-dimensional position information, for example picking up so-called “micro-sleeps” - usually accompanied by a brief nod of the head - and other signs of driver drowsiness that pose an obvious risk.

“ICARUS shows automotive OEMs that there is a straightforward, low-cost upgrade path from DMS [driver monitoring system] designs which use 2D NIR sensing to a full-featured, high-value 3D sensing system,” said ams Osram. “The upgrade requires only the addition of an NIR dot pattern projector and supporting depth extraction software.”

Structured light
Firat Sarialtun, the manager for in-cabin sensing at the company, added: “Structured light sensing technology is proven in the consumer market, where it is used for instance for secure face authentication in mobile phones.

“Previously in the automotive world, however, 3D sensing has only been implemented with dedicated indirect time-of-flight (iToF) cameras. The ICARUS system shows that the automotive industry can take advantage of the experience of 3D sensing which ams OSRAM has gained in the consumer world, and apply it to upgrade existing 2D NIR-based DMS systems simply and at low cost, with the addition of just a single laser component.”

• Osram has also just launched the latest version of its “Oslon Optimal” LEDs, which are aimed at horticultural applications.

So far, the new emitters are available at “hyper red” (660 nm) and “far red” (730 nm) wavelengths. “Deep blue” and “horti white” (featuring reduced red output) versions are expected to launch before the end of September.

“The mix of colors and white provides fixture manufacturers with the flexibility to address the spectral requirements of any horticulture application,” states the firm, adding that the design will be particularly well suited to use in lighting fixtures for vertical farms and high-density greenhouses, where tight clustering of LEDs is typical.