Partners report on how their laser measurement devices for exploring the atmosphere were received in Munich. 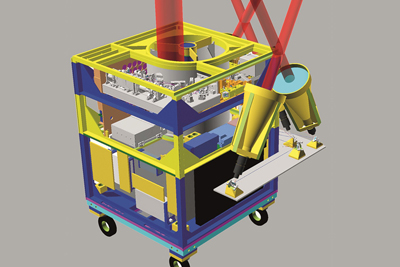 The Fraunhofer Institute for Laser Technology (ILT), based in Aachen, Germany, debuted new laser systems it has developed for researching Earth's atmosphere at last month’s LASER World of Photonics in Munich. This week, the ILT reported that: “many of the 15,000 visitors showed great interest in the systems exhibited, including lasers for space applications as well as for ground-based measurements.”

Over the past few years, a team of researchers from ILT and the Leibniz Institute for Atmospheric Physics IAP, Kühlungsborn, have developed a new generation of laser measurement devices for exploring the atmosphere. At Munich, they presented the latest generation of these mobile systems, which can measure wind and temperature from the ground to altitudes above 100 km.

The core of this Doppler lidar system is a diode-pumped alexandrite laser. With this beam source, the engineers at ILT could develop the instrument – including the transmitting and receiving optical system – in a compact size, only 1m x 1m x 1m.

“The precursor, based on a flashlamp-pumped alexandrite laser, was developed at Leibniz IAP and installed in a shipping container,” said Dr. Michael Strotkamp from Fraunhofer ILT in Aachen. “With the newly developed diode-pumped beam source, our system is clearly superior to the old flashlamp-pumped systems, also in terms of stability and lifetime.” 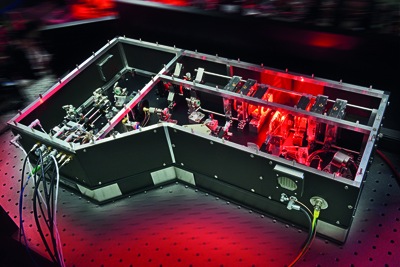 The diode-pumped alexandrite laser is a compact device.

During the past 18 months, two laser prototypes were integrated into lidar systems and successfully tested in measurement campaigns at Leibniz IAP. Two other systems will be delivered from Aachen in May 2022. With more powerful pump diodes, they will deliver over 2 W output power, significantly more than the previous ones.

From the very beginning, the atmospheric researchers around Dr. Josef Höffner participated in developing the laser systems. Now, they have the most compact system in the world for precisely measuring climate data from the ground to high altitudes. As part of the VAHCOLI (Vertical And Horizontal COverage by LIdar) project of the Leibniz IAP, several systems in a network will survey areas of several tens of thousands of square kilometers in the sky.

The system is also under discussion for satellite use. In any case, it will provide valuable data for atmospheric physics. This will help to better understand the interaction between the different layers up to an altitude of well over 100 km and thus significantly improve climate and weather models.

View from the satellite

Of course, the atmosphere can also be measured from above. This is what the German-French climate mission MERLIN (Methane Remote Sensing LIDAR Mission) is all about. A mini-satellite will observe the greenhouse gas methane in the Earth's atmosphere for three years. 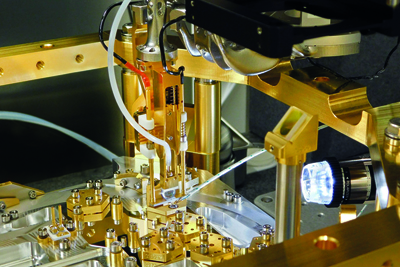 Soldering the first optics of the EQM.

MERLIN also has a lidar system on board, and the laser optical bench, the core element of the laser, also comes from Fraunhofer ILT. For the methane measurement, laser pulses are sent into the atmosphere at two wavelengths around 1645 nm. The difference between the backscattered light signals provides the absolute methane concentration, and the respective height above the Earth's surface is derived from the transit time of the pulses.

Construction of the system for the actual flight will begin this year. After integration into the pressure-tight housing developed by Airbus Defense and Space, the laser sources will be delivered to the customer Airbus Defence and Space upon completion. “The real challenge was to qualify our technology for space projects,” said Bastian Gronloh, the MERLIN project manager at the Fraunhofer booth. “We started doing that about 10 years ago with the FULAS platform, and now all components have been qualified.”

FULAS stands for FUture LAser System, a versatile laser platform based on soldering assembly technology for optical systems and was developed at Fraunhofer ILT in collaboration with Airbus. Above all, the soldering technology was perfected for this purpose, with which the optical components are attached and adjusted precisely and with long-term stability.

The MERLIN laser is being assembled in a clean room at the institute in Aachen. Individual components and the 3D-printed demonstrator of the laser were on display at the LASER trade show. According to the DLR space agency, which commissioned the instrument from Airbus, the mission is scheduled to launch in 2027. The model philosophy and assembly concept can of course also be applied to other lasers – whenever the highest demands are placed on laser precision and reliability.