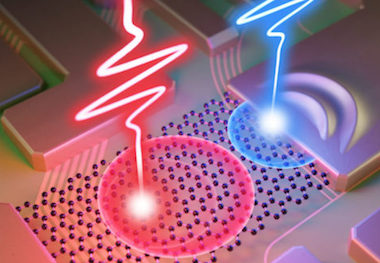 The group has demonstrated a logic gate that operates at femtosecond timescales, potentially opening the door to information processing at petahertz speeds according to the researchers.

As described in Nature, the breakthrough was accomplished by harnessing and independently controlling, for the first time, the real and virtual charge carriers that compose ultrafast laser-generated bursts of electricity.

"It will probably be a very long time before this technique can be used in a computer chip, but at least we now know that lightwave electronics is practically possible," commented Tobias Boolakee from FAU.

Generating ultrafast bursts of electric current with lasers has been a significant topic of research in optical computing fields, for example by illuminating tiny graphene-based wires connecting two gold metals. A laser pulse can excite electrons in the graphene and send them in a particular direction.

One challenge, however, has been that electrons may be excited irreversibly, or only transiently during the period of illumination. The transient or "virtual" electrons cannot be observed after the light pulse ends, while the permanent or "real" population remains present. Both real and virtual charge carriers are absorbed by the metal to produce a net current.

"A link between the generation of the carrier types and their importance for observables of technological relevance is missing," said the project in its published paper. "We show that real and virtual charge carriers can be excited and disentangled in the optical generation of currents in a gold–graphene–gold heterostructure using few-cycle laser pulses."

In work building on experimental measurements at Erlangen and computational simulations at Rochester, the team discovered that changing the shape of the laser pulse allowed the generation of currents where only the real or the virtual charge carriers play a role, as well as the independent control of those two currents.

Controlling the shape or phase of two synchronized laser pulses, each designed to create either real or virtual charge carriers, means the two contributions to an electric current can be made to either add up or cancel each other out. The net electrical signal can be treated as logical information, either 0 or 1, producing an ultrafast logic gate.

"What is amazing about this logic gate is that the operations are performed not in gigahertz, like in regular computers, but in petahertz, which are one million times faster," commented Rochester's Ignacio Franco. "This is because of the really short laser pulses used that occur in a millionth of a billionth of a second."

The physics behind the new logic gate arises from fundamental studies of how lasers can drive charge in nanoscale systems, bringing 15 years of theoretical research to bear on a topic where there has been "explosive" growth in knowledge according to Ignacio Franco.

"This is an area where theory and experiments challenge each other and, in doing so, unveil new discoveries," said Franco. "A great example of how fundamental science can lead to new technology."