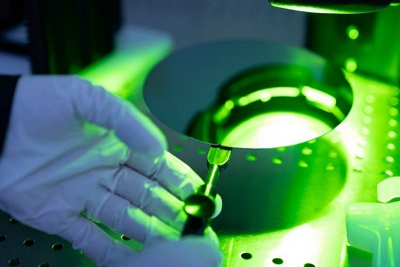 IQE, the UK-headquartered foundry for advanced semiconductor wafers, has entered the emerging market for micro-LEDs, through a development partnership with the startup company Porotech.

A 2020 spin-out from the University of Cambridge, Porotech is working on novel light emitters that are based on porous gallium nitride (GaN) semiconductors, and which can be engineered to produce light at wavelengths across the visible spectrum.

It means that a single material system can be used to produce full-color microdisplays, rather than from a combination of GaN devices emitting blue light, and other material systems for red and green emitters.

Expitaxy expertise
IQE says that the focus of the partnership is to “develop, scale and commercialize” Porotech's approach on 200 mm- or 300 mm-diameter epiwafers to create ultra-high-density and efficient micro-LEDs.

The devices are being aimed at future applications in augmented, mixed, and virtual reality (AR/MR/VR) headsets or glasses, wearable devices, and novel kinds of displays.

IQE’s CEO Americo Lemos, who recently took over from the company’s founder and long-time chief Drew Nelson, added: “We believe the micro-LED market presents a significant opportunity for our business.”

News of the partnership comes just a couple of months after the startup, which Zhu co-founded with Cambridge professor Rachel Oliver and researcher Yingjun Liu, closed a series A round of venture funding worth $20 million.

Representatives from Porotech are also attending the major “Display Week” event taking place in California this week, where they will present the PoroGaN technology and its “DynamicPixelTuning” feature for creating full-color displays.

VCSEL wafer expansion
IQE added that it has also developed new and larger epiwafers that will help to ramp the production of vertical-cavity surface-emitting lasers (VCSELs), and reduce the cost of manufacturing the devices.

The new 200 mm-diameter wafers will offer a step-change in terms of the economy of scale when making VCSELs. The tiny laser emitters are currently manufactured on 150 mm-diameter epiwafers by major producers such as Lumentum and II-VI, having only migrated from smaller wafer platforms relatively recently.

By moving to 200 mm wafer production, it should also become much easier to integrate the devices within silicon manufacturing processes, since silicon semiconductors are typically fabricated on either 200 mm-diameter or 300 mm-diameter wafers.

As IQE points out, the market for 3D sensing in smart phones was only made economical when VCSEL epiwafers were initially scaled from 100 mm to 150 mm wafer production.

“The introduction of 200 mm [wafers] creates opportunities beyond the smart phone, into a broad range of intelligent connected devices,” stated the firm.

Its CEO Lemos claimed: “This is a critical milestone and establishes IQE as the global leader in scaling compound semiconductor technology to larger diameters.”

He thinks that the advance will help to expand the market for both photonics and radio-frequency applications, enabling IQE to meet growing demand as a result of macroeconomic trends such as the uptake of 5G communications and the emergence of the so-called “metaverse”.