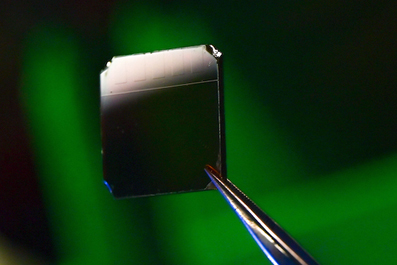 A 2D coat of a perovskite compound is the basis for an efficient solar cell.

Engineers at Rice University, Houston, Texas, US, say they have achieved “a new benchmark” in the design of atomically thin solar cells made of semiconducting perovskites, boosting their efficiency while retaining their ability to stand up to the environment.

The lab of Aditya Mohite of Rice’s George R. Brown School of Engineering discovered that sunlight contracts the space between atomic layers in 2D perovskites enough to improve the material’s photovoltaic efficiency by up to 18%, which they describe as “an astounding leap in a field where progress is often measured in fractions of a percent”.

“In 10 years, the efficiencies of perovskites have skyrocketed from about 3% to over 25%,” Mohite said. “Other semiconductors have taken about 60 years to get there. That’s why we’re so excited.”

The research is described in Nature Nanotechnology.

A longstanding problem with perovskites is that, while they are good at converting sunlight into energy, sunlight and moisture degrade them. “A solar cell structure is expected to work for 20 to 25 years,” said Mohite, an associate professor of chemical and biomolecular engineering and of materials science and nanoengineering.

“We’ve been working for many years and continue to work with bulk perovskites that are very efficient but not as stable. In contrast, 2D perovskites have tremendous stability but are not efficient enough to put on a roof. The big issue has been to make them efficient without compromising the stability,” he said.

The Rice engineers and their collaborators at Purdue and Northwestern universities, U.S. Department of Energy national laboratories Los Alamos, Argonne and Brookhaven and the Institute of Electronics & Digital Technologies (INSA) in Rennes, France, discovered that in certain 2D perovskites, sunlight effectively shrinks the space between the atoms, improving their ability to carry a current.

“We find that as you illuminate the material, you kind of squeeze it like a sponge and bring the layers together to enhance the charge transport in that direction,” said Mohite. The researchers found placing a layer of organic cations between the iodide on top and lead on the bottom enhanced interactions between the layers. 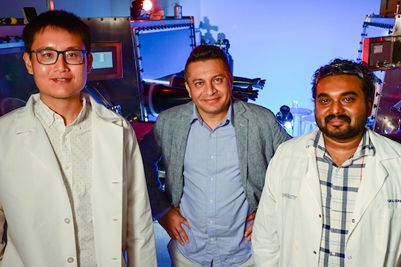 “This work has significant implications for studying excited states and quasiparticles in which a positive charge lies on one layer and the negative charge lies on the other and they can talk to each other,” Mohite said. “These are called excitons, which may have unique properties.

“This effect has given us the opportunity to understand and tailor these fundamental light-matter interactions without creating complex heterostructures like stacked 2D transition metal dichalcogenides,” he said.

Experiments were confirmed by computer models by colleagues in France. “This study offered a unique opportunity to combine state of the art ab initio simulation techniques, material investigations using large scale national synchrotron facilities and in-situ characterizations of solar cells under operation,” said Jacky Even, a professor of physics at INSA.

“The paper depicts for the first time how a percolation phenomenon suddenly releases the charge current flow in a perovskite material.” Both results showed that after 10 minutes under a solar simulator at one-sun intensity, the 2D perovskites contracted by 0.4% along their length and about 1% top to bottom. They demonstrated the effect can be seen in 1 minute under five-sun intensity.

“It doesn’t sound like a lot, but this 1% contraction in the lattice spacing induces a large enhancement of electron flow,” said Rice Applied Physics graduate student and co-lead author Wenbin Li. “Our research shows a threefold increase in the electron conduction of the material.”

At the same time, the nature of the lattice made the material less prone to degrading, even when heated to 80 degrees Celsius (176 degrees Fahrenheit). The researchers also found the lattice quickly relaxed back to its normal configuration once the light was turned off.

The following Rice University video explains the key points in the team’s latest perovskite solar cell developments. The video has been produced by Brandon Martin/Rice University.