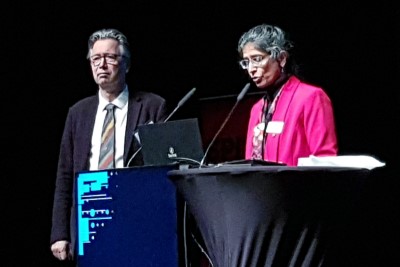 His address highlighted a range of events and features of Photonics Europe including a networking-social for first-timers, career development workshops hosted by SPIE and industry luminaries, and a photonics-based art exhibition around the Palais de la Musique et des Congrès.

This was followed by the presentation of the 2022 SPIE Mozi Award by Prof. Anita Mahadevan-Jansen, of Vanderbilt University (United States) who is 2022 SPIE President. She said, “SPIE congratulates Thomas Ebbesen, who is Director of The Institute for Advanced Study at the University of Strasbourg and CNRS, in recognition of his phenomenal contributions to the field of nano-optics, especially the extraordinary optical transmission through sub-wavelength hole arrays.”

Thienpont described these two major large-scale EC-funded programs that give interested parties access to advanced photonics technology supply chains – from prototyping, to upscaling, and manufacturing and to a variety of services to sharpen market readiness of their product innovations, and to bridge the oft-mentioned “valley of death” that lies between research and end market development stages.

Thienpont is the research director of the Brussels Photonics research group B-PHOT at Vrije Universiteit Brussel. He coordinates several large-scale European research and innovation projects such as PhotonHub, the European Digital Innovation Hub for Photonics. He is also Vice-President of the European Technology Platform Photonics21 and the recipient of the 2021 SPIE Gold Medal.

The following Hot Topics presentation was Quantum Computing: Prospects and Challenges, given by Heike Riel, who is IBM Fellow and Department Head of Science & Technology, IBM Research Zürich (Switzerland).

She said, “The field of quantum computing has evolved into a large interdisciplinary community where significant resources are invested worldwide. As a result, accelerated progress is achieved and we are at the beginning of a new age of computation, developing programmable quantum systems towards universal quantum computers.

“Quantum computers promise to solve certain mathematical problems that are intractable to classical computers,” Riel added. “Quantum computing systems are built from the bottom up reaching the limits of what can be classically simulated. The IBM Quantum Development Roadmap describes our vision of creating a quantum computing ecosystem delivering quantum applications through the cloud.”

Her presentation detailed the recent developments of IBM’s quantum computing systems and the scientific advances that have enabled scaling superconducting quantum processors to 127 qubits were presented.

Besides scale, quality and speed of operations were described, in building the key metrics for measuring the performance of quantum computation. She gave detailed examples of applications where the computational power of quantum computing could make a difference. 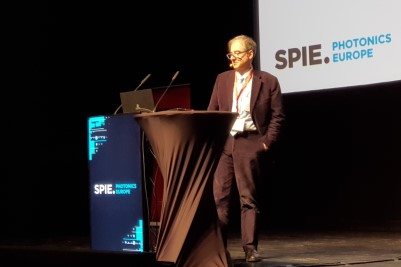 ”The Einstein Telescope is a pioneer project aiming to the realization of a third generation Gravitational Wave Observatory in Europe,” he explained. “Benefiting from the momentum given by the scientific successes of the LIGO and Virgo detectors, the ET project had, in the last few years, an important boost toward its realization, entering in many of the national and international roadmaps.

“The ET will be simultaneously a new discovery and a precision measurement observatory; it has a rich variety of scientific and multidisciplinary targets in astrophysics, nuclear physics, fundamental physics and cosmology.

“It will be also a technological challenge: in order to achieve the expected sensitivity a new underground research infrastructure will be realized, a multi-interferometer per detector design will be implemented hosting new or updated technologies studied to reduce the noises limiting the current detectors.“