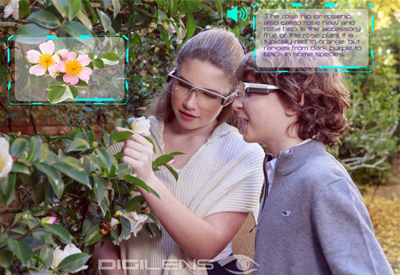 Mitsubishi Chemical Holdings, Tokyo, Japan, has announced that its subsidiary Diamond Edge Ventures (DEV) has invested in DigiLens, based in Sunnyvale, CA, US.

The investment will enable DigiLens to further develop its holographic waveguide displays, intended for applications in automobile, consumer, avionics and military sectors. The value of the investment was not detailed, but this new DEV funding represents the third round of funding for DigiLens.

In May, DigiLens raised $25 million from Continental, an automotive technology firm based in Germany for holographic displays. By that point, the company had raised a total of $60 million from investors, including Sony and Foxconn. DigiLens says it expects AR will be the next-generation digital platform to follow smart phones, and anticipates “large market growth”.

In January 2017, DigiLens announced it had won financial backing from some of the electronics industry’s biggest brands: Sony and Panasonic were among several big-brand investors to contribute to series B funding totaling $22 million.

MCHC established DEV in Silicon Valley in July 2018 to create strategic partnerships with start-up companies possessing technologies and business models that can promote new business growth for the MCHC Group. Through DEV, MCHC says it will “continue to partner with promising start up companies to deliver new growth opportunities to MCHC Group and its operating companies.”

Patrick Suel, President of DEV, commented, “We could not have found a better first investment than DigiLens, because it demonstrates how MCHC’s advanced materials technology can help create a new market through strategic partnership with a world technology leader. “Through this investment, we also become an active participant in an AR/VR technology ecosystem projected to have broad impact across B2B and B2C industries, and we will accelerate adoption of a new computing platform that will benefit MCHC current businesses as an early adopter.”

Chris Pickett, DigiLens’s CEO, said, “This investment and development relationship with MCHC Group, which is a global leader in high-performance polymers, will strengthen the ecosystem of support for DigiLens, our licensees and their customers for the high-volume manufacturing of displays at consumer price points that cannot be matched by other technologies. “In addition to cost, the new first-of-its-kind plastic material for waveguide displays will be lighter weight and nearly unbreakable, which is especially important for eyeglass-thin smart glasses and displays for smart helmets.”

Niantic, a key developer of consumer AR gaming experiences – with titles such as Pokemon Go, Ingress, and the forthcoming Harry Potter: Wizards Unite – is also joining this financing round. “Niantic has spent years transforming the world into a game board,” said John Hanke, CEO of Niantic. “DigiLens is on an amazing path, in collaboration with MCHC, to bring more affordable and accessible hardware experiences to players around the world, making it possible for characters and game play to be seamlessly woven into the real world, supported by compelling safe and lightweight plastic AR displays.”