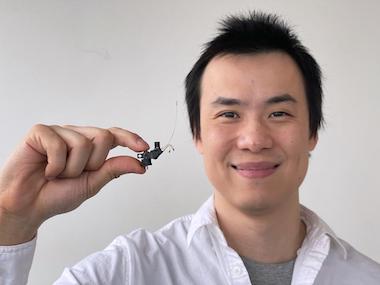 Full results from trials of the MINI2P microscope device have indicated its potential value in imaging neural activity in vivo.

MINI2P has been developed by the Kavli Institute for Systems Neuroscience (KISN) based at the Norwegian University of Science and Technology, specifically as a route towards easier use of 2-photon (2P) microscopy in calcium imaging of the brain.

Compared to traditional microscopy, 2P modalities should allow imaging in multiple planes along the Z-axis and across a range of scales, from substructures of cells such as axonal branches to topographical maps of ten thousand cells.

Application of 2P techniques has been hindered by their need for large stationary benchtop instruments, according to the project. A successfully miniaturized and potentially head-worn device would open new doors for animal studies, and this was the driver behind development of the MINI2P platform.

In September 2021, when live animal trials were completed but the results not yet peer-reviewed, the project was enthusiastically supported by optogenetics pioneer Karl Deisseroth, who called the work "amazing...spectacular."

The full results gathered by MINI2P while attached to the head of a mouse subject named Leif Erikson have now been published in Cell, and confirm that the probe was able to deliver stable high-quality imaging during a wide spectrum of animal behaviors, according to the project.

"If we want to understand complex behavior, the animal must be free to move and behave in a way that is natural for it," said Edvard Moser, co-director of the Kavli Institute. "The Mini2P is the first tool that allows us to study neural network activity at high resolution in naturally behaving animals."

A game-changer in neural imaging

As noted by KISN in its September announcement, MINI2P was designed to achieve a key performance metric by monitoring 10,000 cells. This goal involved the use of multiple strategies, combining an enlarged field-of-view with specialized stacked MEMS tunable piezo-membrane lenses developed by the project and christened µTlens, to allow z-scanning of multiple overlying planes of neurons.

In addition, a method was developed in which successive images of neighboring FOVs could be aligned and stitched together, with steps taken to ensure that neurons caught in repeated images registered only once in the end result.

By systematically comparing behavior in mice carrying different miniscope and cable configurations, the project found that the strongest impediments on animal behavior were caused by stiffness and diameter of the connection cable assembly itself; factors substantially mitigated by the small size and 2.4g mass of MINI2P.

"With its reduction in headpiece weight and the increase in flexibility caused by tapering of the collection fiber bundle, MINI2P enables animals to behave with the same level of flexibility as with 1P miniscopes, despite the added hardware," noted the team in its Cell paper.

Successive MINI2P imaging across multiple, adjacent FOVs enabled recordings from more than 10,000 of Leif Erikson's neurons in the visual cortex, the medial entorhinal cortex, and hippocampus, revealing spatial tuning of cells in all areas.

'The amount of research data collected from every single recording may play a role in reducing of the number of animals used in research,” said Kavli's May-Britt Moser. "We believe the Mini2P is a game-changer, and we want to share it with neuroscientists and labs across the world."