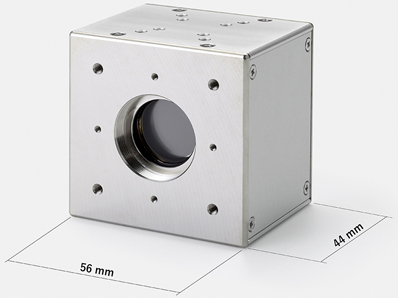 Hamamatsu Photonics has developed what it calls “the world’s first terahertz image intensifier”. Capable of real-time non-destructive imaging, the device could have applications in the foreign matter inspection of food products and in (human) body scanning.

The image intensifier “THz-I.I.” is based on Hamamatsu’s imaging technology developed over many years. The company states that THz-I.I. has high resolution and a fast response, which allows for real-time imaging of terahertz wave pulses transmitted through or reflected from target objects.

The THz-I.I. will be unveiled at the 69th Japan Society of Applied Physics Spring Meeting (JSAP) to be held at Aoyama Gakuin University in Sagamihara City, Japan from Tuesday, March 22 through Saturday, March 26.

By selecting the photocathode material, the incoming light including visible and invisible light can be converted into electrons, which are then multiplied in a vacuum. This enables high-speed, high-resolution and high-sensitivity imaging of luminescent phenomena.

This photoelectric conversion technology is applied to Hamamatsu’s imaging technology to form a metamaterial antenna on the inner surface of the I.I. input window. Hamamatsu also redesigned the antenna structure to increase the efficiency of converting terahertz waves into electrons – which are effectively multiplied in the vacuum.

The intensifier is expected to expand the range of applications of non-destructive inspection. For example, rapid in-line inspection of nails and thin films in food production; contaminants are normally difficult to detect using conventional X-ray inspection techniques.

Since terahertz waves are harmless to the human body, the THz-I.I. is also promising for body scanners that capture real-time images of terahertz waves reflected from the target object. This will prove highly effective when making walk-through security checks at train ticket gates and entrances to event venues.

In research, the THz-I.I. will serve as a tool to acquire the beam profile of terahertz waves or to adjust the terahertz optical system. As a future goal, Hamamatsu said, “we will be pushing ahead with developing a THz-I.I. with higher sensitivity for actual use and aim to start shipping product samples within one year.”