University of Cambridge spin-out has created porous gallium nitride materials that can be tailored for red, green, or blue emitters. 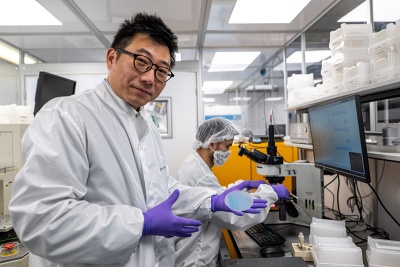 Porotech, a UK startup company developing a novel class of light-emitting devices based on porous gallium nitride (GaN), has closed a series A round of venture funding worth $20 million.

The cash will be used to accelerate mass production of micro-LEDs based on the firm’s “PoroGaN” compound semiconductor material, which are being aimed at applications in augmented and virtual reality (AR/VR) displays.

While GaN-based materials have long been used to fabricate blue and ultraviolet emitters, PoroGaN can be engineered to emit at a much wider range of wavelengths including red and green - meaning that a single material system can be used to produce full-color microdisplays.

RGB from InGaN
Spun out from the University of Cambridge in 2020, Porotech’s approach is based around the research of co-founder and chief scientific officer Rachel Oliver, a professor at the Cambridge Centre for Gallium Nitride.

In June 2021 Porotech raised £3 million in seed funding, and it now offers epiwafers for green (530 nm) and blue (450 nm) micro-LEDs, all based on the InGaN system.

“Until now, the requirement to mix multiple material systems has complicated the manufacture of full-colour micro-LED displays - making the final products prohibitively expensive for mass-market applications,” states the firm.

“Porotech’s use of a single material system is a significant leap forward that opens the door to mass manufacturing of micro-LED displays.”

CEO and co-founder Tongtong Zhu added: “Porotech’s progress during its seed phase has been absolutely staggering – both technically and commercially.

“We have delivered the world’s first InGaN-based red micro-LEDs and displays, and have set up production of our first products - shipping to some of the biggest global names in display technology.”

Zhu says that the new funding round, led by China’s Ameba Capital and with additional support from seed investor Speedinvest, will accelerate the development of PoroGaN products for deployment in AR/VR glasses.

“The fact that it already has industry leaders among its clients and partners is a testament to the game-changing potential of Porotech’s breakthrough.”