Heat-shrink method could expand the capabilities of shaped electronic devices. 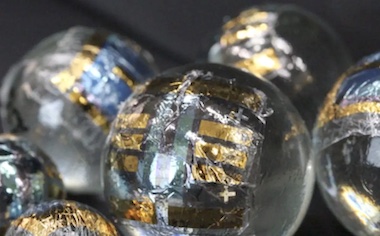 Around the bend: shrink-wrapped PV

Curved solar panels are one logical route towards capturing sunlight more efficiently than flat surfaces can, but manufacturing them has presented several challenges.

Assembling the photovoltaic layers on flexible rubber substrates has tended to adversely affect performance, while fabrication on flexible polymer sheets then requires those sheets to be attached to curved surfaces, often imposing tricky geometries.

A project at Japan's Riken research center has now developed a possible solution involving heat-shrinkable films, an analogous approach to the encapsulation methods used for some over-the-counter products and medicines.

Published in Advanced Materials, the results built on previous work by the team at Riken's Center for Emergent Matter Science on the development and manufacture of ultrathin devices. Riken has also previously studied the effect of molecular orientation and polymer architecture on the ultimate performance of PV materials, determining that favorable distributions of crystallites will influence charge transport when the devices are in use.

"When a material becomes thinner, it becomes more flexible," commented Steven Rich from the Riken Thin-Film Device Laboratory. "Although we use rigid materials such as metals and plastics, they are three times thinner than a grocery bag and can bend very sharply without breaking."

The fundamental problem when incorporating electronics onto curved surfaces has been that the surfaces can be "non-developable," unable to be flattened onto a plane without distortion. This means that curved electronics cannot capitalize on the rapid technological advances taking place in the field of ultrathin electronics, since ultrathin devices, though ultraflexible, are not stretchable, according to the Riken project.

In a 2021 review of the topic by the same team in Materials Horizons, the authors noted that "the rigid angular nature of traditional electronics has prevented them from being integrated into many of the organic, curved shapes that interface with our bodies or the natural world. Many groups working in advanced manufacturing and soft robotics have endeavored to develop strategies for fabricating electronics on these curved surfaces."

The strategy developed by the new Riken project involved attaching a non-stretchable, but flexible, polymer sheet to a shrink film, and then using microscopy to observe the layered structure during various exposures to heat. These tests revealed that as the device’s area shrank by up to 70 percent, the ultrathin sheets relieved the strain of compression by forming tiny wrinkles and folds.

By controlling the size of these wrinkles and choosing materials capable of surviving both heat and severe wrinkling, the team found they could shrink prefabricated organic photovoltaic modules onto round objects as well as ones with sharp angles and irregular curvatures, including plastic rocks and traditional Japanese Daruma dolls.

Although common sense suggested that shrinking might damage the photovoltaic components and reduce device performance, the project found that the opposite occurred. Experiments indicated that the photonic properties of the shrink-induced wrinkle structures improved light absorption, boosting power conversion efficiencies by up to 17 percent over planar devices.

The team also used shrink wrapping to laminate the handle of a teacup with an electronic touch sensor, a delicate operation that serves as an example of how this technology could be widely applied.

"We could incorporate sensors along with displays, power-generation systems, and transistors to create interactive interfaces," noted Riken's Steven Rich.